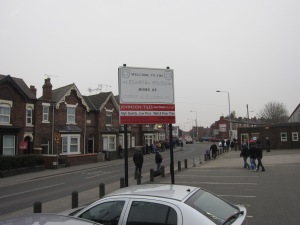 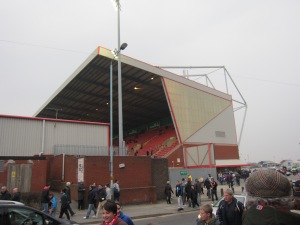 After the glitter of the Premier League and the Manchester United, I found myself on the train from Manchester Piccadilly to Crewe Wednesday night. I had expected to chat up some fans on the train, as I have gone used to trains on match days being full of supporters. But tellingly, I didn’t spot a single one, so the only fun on the 50 minute trip was a conductor telling people to take the luggage off the seats “or I will throw it out the windows when I come around” and at Alderley Edge (where quite a few footballers live) telling people not to get off unless they were “wearing smart shoes and no denims”.
Fortunately, you can spot the ground from the railway station, so despite the lack of supporters walking from the station, I had no problems in finding the way. 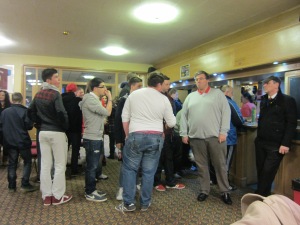 Alexandra Park reminds me of the small Copenhagener football grounds with a main stand with about 6000 seats being the centre point, with only small low stands on the three other sides, totalling about 4.000 seats. The differences are that the three other stands are ceiled and all-seater; that “The Ice Cream Van Stand” contains a pub-like bar for local fans; that Gretsy Road outside parade one of the finalists for fish ‘n chip shop of the year (I most admit that it is probably the best fish ‘n chips I have had for several years); and that the crowd has the characteristic pride and passion in their team.

It feels a bit odd that you for a 4.500 spectator match at a 10.000 seater stadium have to buy at ticket at the ticket office to get in, instead of just paying at the turnstyle. I asked the lady for a ticket to the most vocal part of the ground, and she answered that that would be behind the goal (or she could have sent me to the visitors, Brentfords section). Having purchased my ticket, I went to the souvenir shop, where fans proudly (apparently without paying) had their photo taken with the Johnstone’s Paint trophy cup that they had won at Wembley during the weekend.

That just about left me time to go to the chippy before the match. The queue was long (compared to the many outlets of junkfood around many football grounds), so I only just made it into the ground by kick-off. The crowd seemed very local; although a nice Crewe fan I spoke with on the way back told me that they had a Scandivian supporters club and that there always were members attending.
He was himself born in Manchester and used to be a City supporter, but at 11, his family moved to Crewe, and he had gone over to his new local team. Having grown up, he had travelled round the world for many years, but when he settled back in the UK near Stocport 10 years ago, he and his wife got themselves season tickets – and went to all home matches. And if the fixture list was kind enough to make it possible to accomodate away fixtures in their daily life, they went to them as well.  The problem was, however, that the young lads in Crewe watched the premiership on televsion and ended up supporting Liverpool or other premiership clubs nearby.

In my section behind the goal, more than half the crowd were teenagers. I guess we were about 5-600 hundred, the Brentford supporters in the small stand by the touchline roughly the same, with about 3.000 in the main stand. A few of them still proudly wore their Wembley robes from the weekend. And the Wembley hangover may, according to my friend, have contributed to a tame Crewe performance. 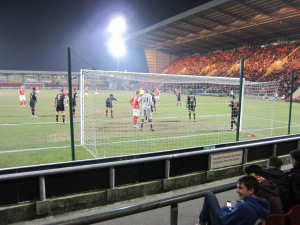 As Brentford according to a couple of their fans put in their best away performance of the year (according to my Crewe friend Brentford were the best team to visit the Alexandra this year, and they certainly played the best football I have seen on this tour so far) and took the lead after about 10 minutes with a stunningly beautiful goal, the Crewe fans as well focused their energy on talking about the glory of the weekend rather than trying to get behind their team. 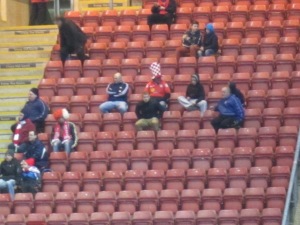 There were a few chants, but the stand turned into a social gathering for groups of teenage boys with the odd pairs of teenage girls in between them. Amd after all, Crewe only had an outside chance of making the play-offs, so why dwelve too much on that? Why not have a good time talking with your mates?
Despite carving out several good positions with their crisp and energetic football, Brentford didn’t manage to find a second goal till 8 before time. At that stage, a large part of the teenagers disappeared into the dark night, while the old ones stuck it out until the end, swearing and cursing. 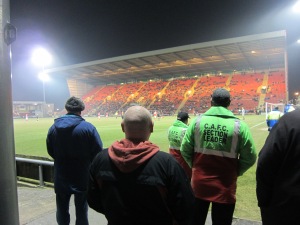 Alexandra Park seems to be a nice social arena for local gatherings. Perhaps not too different from Danish football, but still with a distinct English touch, in the way you dress, eat, drink, watch, sing, chant – or in other words how you consume football.