Back in Sheffield for the second time in six days, this time to visit Sheffield Wednesday in relegation battle against Blackburn Rovers. And to see for myself whether it is actually true that the Wednesday supporters are not as passionate as the United supporters.

But first of all an opportunity to visit arguably one of the most famous football grounds in the UK. It is not just that it was the stadium disaster at Hillsborough in 1989 that triggered the transformation of English football. Even before, Hillsborough had been the venue of so many classic FA Cup semifinals – and afterwards hosted among others Denmark in Euro 96.

I had hardly got off the train at the station before I was struck by the welcoming, friendly attitude of Sheffield Wednesday supporters. I asked a father of a teenage daughter, how to buy tickets for the tram – along with a lonely Blackburrn supporter. After exchanging frustrations and pessimism with the Blackburn lad, the Wednesday supporter and I were absorbed in conversation. I told about my project of travelling around; and soon the ladies sitting next to us on the tram joined in. The two elderly ones were not going to the match today, but Christine (about my own age) suggested that I should get off at The Rawson Spring for a pint where they had some good sandwiches as well.

As I hadn’t had any breakfast, I  followed her – and we joined up with her mates at the back of the crowded pub. We had a few pints – and a good chat. They asked me why I had chosen Sheffield as destination on my travels – and I answered that Sheffield was a pioneering footballing city. They did, actuallly, take great pride in this (adding that the rules for the modern game also originated from Sheffield), but stressed that Sheffield United weren’ pioneers but just copycats. They took over the ground, when Wednesday left the cricket ground to build Hillsborough; they took over the nickname “The Blades” when Wednesday adopted “The Owls” after moving to Owlston; they took over stripes on the shirts – and they were created by a Wednesday board member, who was also chairman at the cricket club, so that Wednesday had a local team to play. I asked them about the United museum – and perhaps tellingly for fans’ view on football museums, they said that there was nothing in it; Sheffield United hasn’t won anything for 100 years.
When I told them that I recently had read that Michael Palin, born in Sheffield, actually grew up supporting United,but since he left the city has stretched his loyalties to Wednesday as well, they were very scornfull. You can’t do that. No way.

I also asked them about their greatest moments. The first three they mentioned were victories against Manchester United – so I had to tell them about my loyalties. At first they were a bit sceptical, thinking I was just a glory hunter – but telling that my first United match was in 1972 got us over that.

They were so knowledgable about Danish football, that they not only asked for my Danish team; they also asked what was going wrong at Brondby.

I left 45 minutes before kick-off, as I hadn’t got a ticket – promising to meet up at the same table after the match.

Took the tram another two stops and got off at Lepping Lane as the 24.660 crowd really was gathering. The ground is beautifully located, with a sloping hill in the distance, narrow streets of housing along the North Stand, and a river along the South Stand. Although the ground has been modernised since 1989, the changes are not radical. Of course, the terraces have been covered with seating; the wooden seats replaced by the standard plastic seats; and the South Stand has been redeveloped, but still with the 124 old clock on top it. It really has a unique atmosphere (and the supporters were scorrnfull of the Reebok in Bolton.). 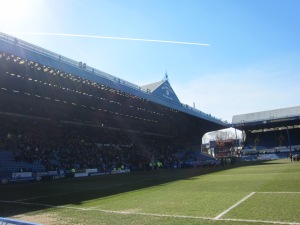 As I made my way round the ground heading for the ticket office, I passed the Spion Kop, which like the one at Bramall Lane was still a sloping hill side with trees on it. Although the first Wednesday fan I met had advised to buy a ticket for the more “modern” South stand, I just had to try this Kop as well. 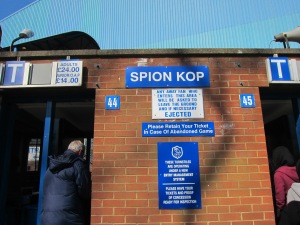 On the tram, one of the ladies had labelled Sheffield Wednesday “a family club”. And most of my impressions supported that claim. Not just the smashing Wednesday supporters at the pub; the guy in the ticket office asked for my postal code. When I said I was from Denmark, he went: “oh, I was in Copenhagen a few weeks ago. Great place, do you live there?” With 20 minutes to kick-off and a queue behind me, you wouldn’t expect him to chitchat.

The turnstyle was the most narrow one I have passed so far. Looking at some of the overweight fans, I wondered how they managed to do it. The spaces at the foot of the hill are also very narrow, the toilets and stalls as well. I felt a bit like going to the trenches, with stairs leading “over the top” to the battleground. 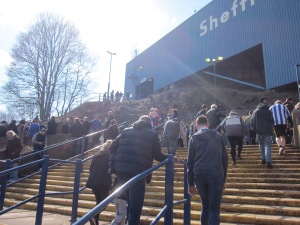 The Hillsborough Kop IS impressive. Before it was converted into an all-seater in 1993, it held 22.000 fans – claimed to be the biggest terrace in Europe. Now, it only holds half that number, but still – very impressive. 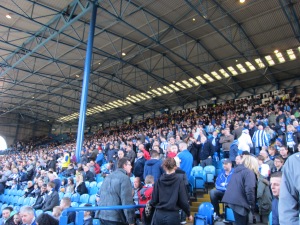 The crowd seemed to confirm the claim to being a family club. There was a lot of variety in age – and genderwise, I would estimate that there were no more than 3 men for every woman. In front of me, for instance, I had two women and a little girl. And that was probably the most remarkable – the number of kids aged 8-12, some even younger. 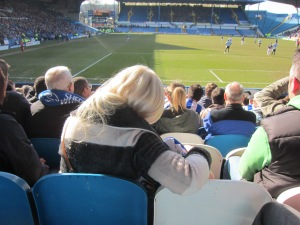 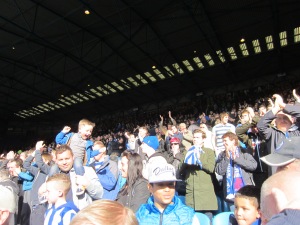 It is difficult to compare levels of engagements in matches. There are so much more excitement in a 3-2 win compared to a 0-0 draw that it probably would be unfair to the Sheffield United supporters to conclude that the Wednesday supporters are slightly more vocal.  But – they did have a drum and a trumpet accompanying them, making the sound a touch too continental for my liking.

Although the crowd was vocal, there were not any aggresive chants aimed at the away supporters, who admittedly didn’t make much of a show. There were a couple of “Hark now here, the Wednesday sing, the United run away, cause we will fight forevermore, because of boxing day”, although the section of the North stand closest to the away supporters may have made up for that. Not that there were no f-words being hurled at the referee and players throwing the ball away. But the ground seemed more “family geared” in this way, too. 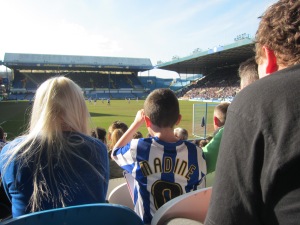 The fans also seemed to apppreciate more controlled football than sheer effort and determination. Whenever a Wednesday player whacked an aimless ball forward, there were groans of frustration going round the ground.

After the match, I went back to the pub for another few point while we witnessed Cardiff battling out a goalless draw at Watford on the big screen. Big hugs and exchange of email adresses at the end. I will definetely be back! 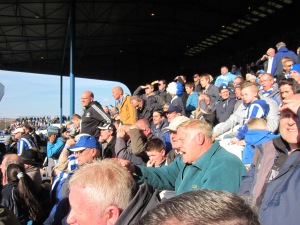 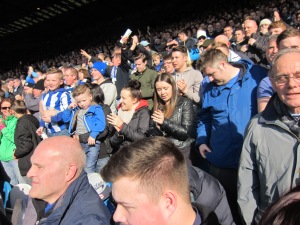