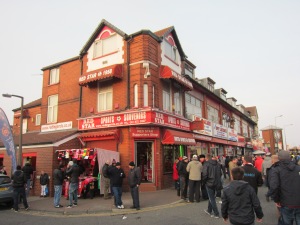 I knew that it would go wrong, when I at 2.40 left Old Trafford for the metro, passing the shops on Chester Road. I have always had my pre-match meal at Lou Macari’s fish ‘n chips there; but yesterday I was going to the Manchester Central in stead as part of my VIP package. You should never break a match-day habit.

I had lost out on the ballot among members for tickets for the local derby, so I had had to splash the cash on a VIP package. Champagne, 3-course meal, a United legend, coach to the match, and back to the central for free bar. It may sound good – but it is not the match experience that I have gone used to. Anyway, this would be a new and different take on matches – to meet the VIPs – and I wouldn’t have to leave the ground at 5.45 without attending the match which would have been even more strange. 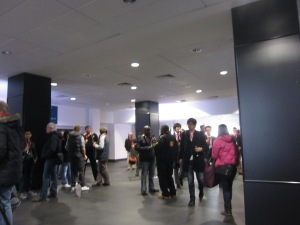 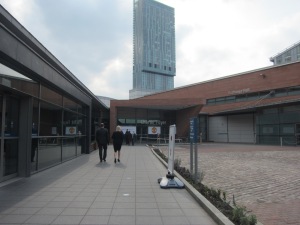 Finely dressed hostesess pointed the way to the reception at Manchester Central, where I got my armband and was offered my drink. There was not much VIP over the guests, in fact, they were just as “ordinary fans” as myself. They all seemed to be foreigners over for the match, who had been unable to get an ordinary ticket, and anxious not to miss out on the match had bought the package. The difference was that most of them were over for their first or second match, whereas I have reached the fourty mark.

As soon as we entered the hall for dinner, I spotted that the legend was Clayton Blackmore, and went up to him for a chat on life as a pro then compared to now, before he started going round the tables chatting with visitors. Great guy – but I couldn’t help feeling a bit uncomfortable with the efforts of the host to create an exciting atmosphere with music, a quiz and agitated talking. But perhaps it was necessarry, because looking around at the tables, there were a few people seemingly much more uncomfortable than me not speaking with anybody. I, at least, had a good time with new fellow United supporters from Malaysia, Norway, Namibia and Belgium. 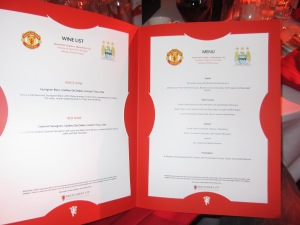 We were supposed to leave for the ground in coaches at 6.30, but if there many people who wanted to go early, they would send off some of the coaches at 5.45. Everybody at my table wanted to go …

Looking at it a bit cynically, the VIP packages are the club’s way of taking income that the ticket touts otherwise would have got. When you spend hundreds of pounds to travel to Manchester for a game, you are likely to spend another few hundreds on getting your ticket. And normally that would create a good market for the ticket touts. But now the club has taken out a few thousand tickets and is selling them at £250 more than face value – with the dinner, the legend, and a quiz as the excuse. And compared to buying tickets from a ticket tout, it is much safer to buy the high price tickets from the club – and get the bonus of a chat with a United player.

And to some of the visitors, it was probably a great experience. Everybody celebrating their birthday was called up to receive a birthday card from Clayton and have their photo taken with him. And I couldn’t help feeling warm inside when 12-year-old Julie from Norway – making the trip for the first time as a birthday present – was called up. I think that added to her day out. And my new Malaysian friend, whom I photographed together with Clayton, also got a memory to cherish.

But – I prefer the Chester Road match experience, whether it is the Bishop Blaize, the Lou Macari fish ‘n chips or Red Legends souvenir shop and a chat with Angelo, or the fanzine sellers on Sir Matt Busby way. Perhaps a nostalgic feeling of what it used to be like to go to matches, when I was one of a very few foreigners travelling. 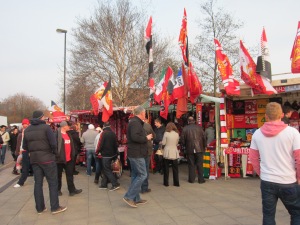 It is really globalization. We all know the phenomena of Europeans spotting exotic little places, and within no time these places are taken over by tourism and “spoiled”. This is the same, only here it is the Asians (and Scandinavians) coming in great numbers, creating something new and different. Fans of other clubs claim that it is “fake”. But there is still a core of the old match experience. And on the positive side, it attracts a much more varied audience than the normal, mainly white, adult male audience. The crowd at Old Trafford is certainly much more diverse ethnically and genderwise than at the other grounds, I have visited.

Old Trafford has been redeveloped to such an extent that it hardly bears any resemblance with the ground of the late 80’s. “Car park archictecture” one of my friends have labelled Old Trafford and the Emirates. With a corporate glass facade you may add. It doesn’t have the charm of the old factory/fortress of Old Trafford of the 80’s. But toilets and facilities are definetely more convenient now. 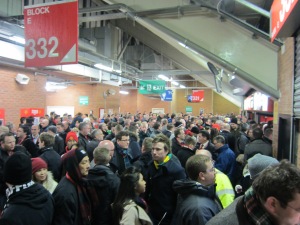 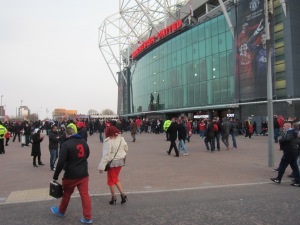 As you can’t bring alcohol into the stands, and you can’t stand next to your mates and chat, most people stay away from theirr seat till the very last moment before kick-off. Therefore, there is little of the build-up there used to be. But for the Manchester derby and similar big matches there was enough edge to generate a bit of atmosphere about 10 minutes before kick-off, sparked by outbursts of singing and chanting of the City supporters – as away supporters always seem to be the most tightly knit, vocal group.

And for the first 25 minutes of the match, it was almost nonstop singing and chanting around the ground. There were no silent spells like at Anfield the previous day, but, of course, a Liverpool – Everton clash at a later kick-off time, with the title at stake, would definetely also have created a more heated atmosphere.

The feeling of things being all wrong, when I skipped Lou Macari’s in the afternoon, came back to me, as United’s injury-hit back-four backed off City’s attackers, giving them yards of space to receive and control the ball. Astonishing. And a remarkable high percentage of bad passes, capped by Rafael when he threw a throw-in straight to a City player without a United player near him. Rooney and RVP looked off the pace – so from the 20th minute, I was hoping for a couple of substitions to turn it around. They just didn’t happen. And when Ryan Giggs early in the second half carelessly backheeled a City player into possession and City grabbed a goal (which actually ought to have been ruled-out for off side), it was hard to see a way back. United did, somehow, grab a deflected equalizer, and the crowd rose accordingly. But when City regained the lead 12 minutes from time, there was not much belief and energy in the crowd, as people started leaving to beat the hour-long queues out of Manchester. I should have had the fish ‘n chips.

I had thought of trying to get some autographs for my son’s collection, but thought that there probably wouldn’t be anybody signing after such a disappointing match. So I went to chat with some Irish guys, who were waiting for former players to leave the Director’s entrance. I just didn’t feel like going to the free bar and the agitated host trying to keep spirits up after such a disappointment.