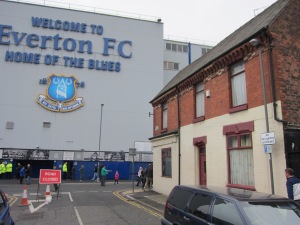 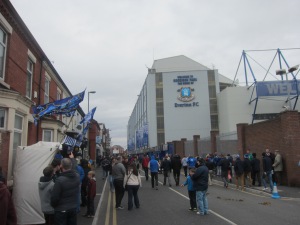 Goodison Park, one of the few English Stadiums still featuring the characteristic achitecture of Archibald Leitch, who engineered most English football grounds around the start of the 20th century; despite his first project at Ibrox Park in Scotland turning out to be fatal disaster. But, Leitch learned from his mistakes, and grounds such as Goodison, Old Trafford, Highbury, and Craven Cottage were build by him during the following decades. 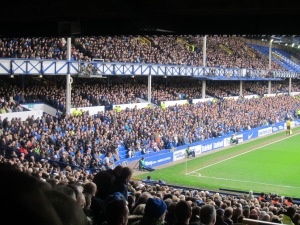 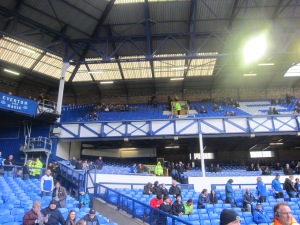 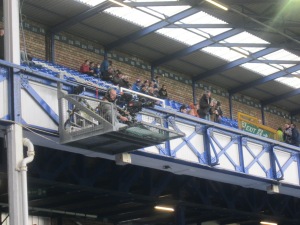 At Goodison, the Bullens Road Stand and the Gwladys Street stand are basically Leitch’s constructions with the balconies with criss-crossed steel balustrades and huge pillars interfering with the view of those unfortunate enough to sit directly behind them. 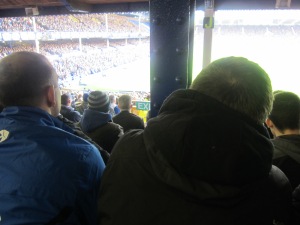 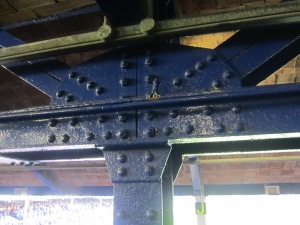 I chose to go the Gwladys Street stand to get the chance to have a closer look at Leitch’s architecture, despite reading recommendations that you from the top of the main stand from 1971 actually can see across Stanley Park to neighbours Liverpool’s Anfield Road. And as the rain started to poor down, I was glad that I had the chance to look at the single, huge room underneath the stand; not narrow and claustrophobic like you find the in many grounds. 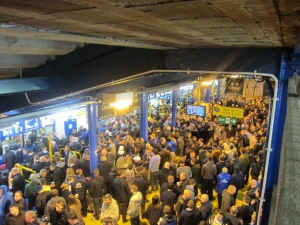 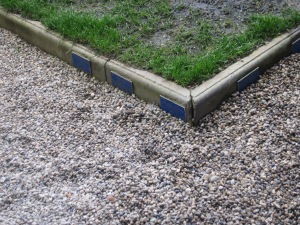 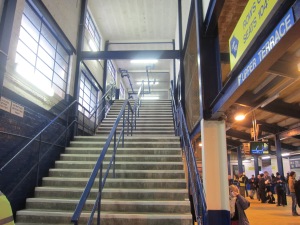 I also had the opportunity to go pitchside and have a look at the plaques for some of the 800 dead, who have had their ashes spread on the field. In many ways, Goodison has a sacred status. They are – according to a heritage plaque – the only ground to be situated in the back garden of a church, St. Luke’s church at the corner of the Gwladys Street stand. And it is certainly the first time I have seen programme and scarf-selling from a church; they also served pre-match snacks at the church, but have  apparently recently stopped the selling of old programmes. Argentina may have the hand of God, Everton have his house. 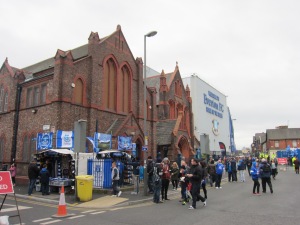 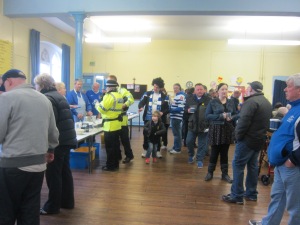 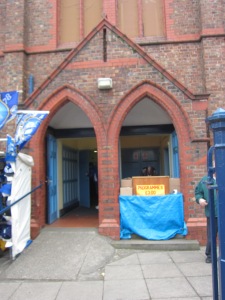 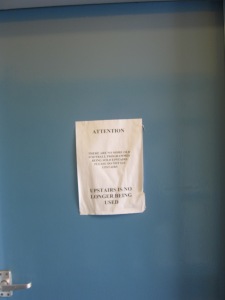 Everton are proud of their history. They still have a 12-year-old toffee-girl walking round the ground before the match, throwing toffees to fans. And outside, the stadium is adorned by a timeline of Everton’s history, made by the ground-breaking Everton collection. There is also a statue of Everton legend Dixie Dean in front of the reception at the Park Stand. 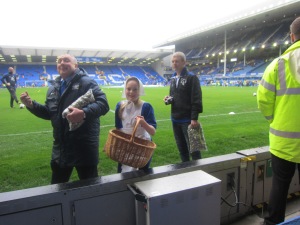 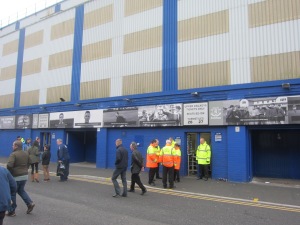 Everton brand themselves as “The people’s club” compared to Liverpool F.C. “Everton fans are born, not manufactured, we do not chose, we are chosen, those who understand need no explanation, those that don’t understand don’t matter.” proclaims a banner near the ground, 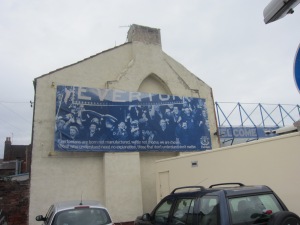 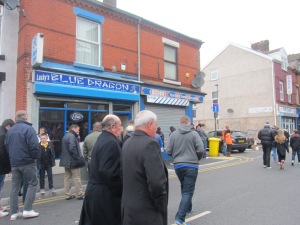 It seems a bit like Manchester City proclaiming that they are the club of Manchester – how well the claim is founded is another matter. True, you don’t see the many asian tourists around Goodison, the crowd seems more local. An true, the train from Manchester was not filled with supporters on their way to the match like last Sunday, but then there was only 2 hours to the early kick-off last Sunday, but 4 hours today (but I did have a great chat with Neil, a Derby County supporter, having a day off). And. There must be a reason why you can buy tickets for their matches at the tourist centre (convenient for me that I didn’t have the time to go straight to the ground to secure a ticket, but could explore the museums in Albert Dock). And I did spot some Frenchmen, saw some Swedish guys at the stadium who looked like they were on the way to a football match – and I bumped into Henrik Larsen from the Danish European Championship winning side in 1992, who told me that he was part of group of 90 Danes making a weekend tour to matches in Germany, England and Italy (although it is Everton legend Howard Kendall pictured above approaching the ground). And anyway, the crowd at Goodison was 35.000, 10.000 less than Liverpool’s at Anfield, so I doubt that Liverpool has less local support than Everton. 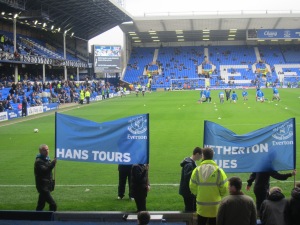 But Goodison is definetely Scouse territority! I went to a snack shop near the ground, and didn’t understand a word of what the waitress said (except her final “luv”) – her scouse accent was that thick. I tried to be local and ordered two Scouse Pies – but they must go down as the most disappointing pre-match meal I have ever had. Inside the ground, everybody around me were talking with scouse accents almost equally thick. Fortunately, their outbursts were so brief that I got the meaning without subtitles: “f….. shoot!” and things like that. The crowd was – from what I saw 100% white, with relatively few kids, but a fair share of women. 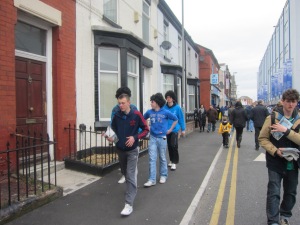 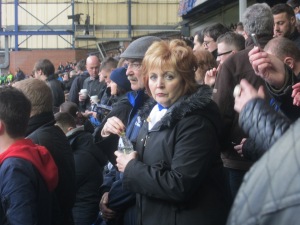 There were, however, very little singing or chanting from the Everton supporters in the first half. Just like at Liverpool. Of course, this wasn’t a derby like the match at Old Trafford Monday, but still I am amazed with commentators talking about Old Trafford being quiet. It is not what it used to be, right, but still I have not experienced it as quiet as Anfield and Goodison in the first half. Neill, my new Derby supporting friend from the train, had advised me to always go to the away section. Up until Everton taking the lead, the relatively small contingent of QPR supporters was definetely doing the singing. But in the second half, as the threat of relegation stared them in the face, it sounded as though they grew quiet. 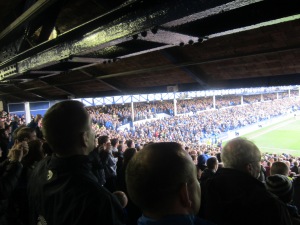 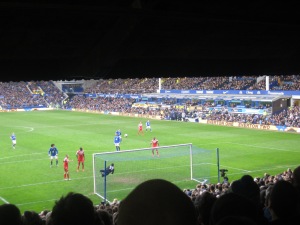 The Everton supporters behind me had just proclaimed that they would be leaving the ground on 60 minutes, if it was still 0-0, when Everton took the lead courtesy a lucky deflection just before halftime. Still, it was not until the second half when Everton were attacking the Gwladys Street End, that they finally found their voice Which coincided with Everton applying the first spell of sustained pressure with a couple of goalline clearances, before going two goals up.

At the final whistle, the crowd dispersed in the narrow streets around Goodison, which is even more tightly crammed by rows of housing at Anfield, but unlike Anfield, the housing around Goodison has not been condemned but is giving you a feeling of what football used to be like. 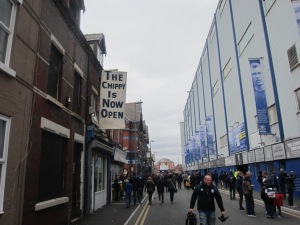 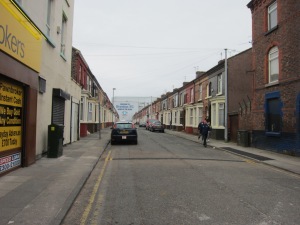 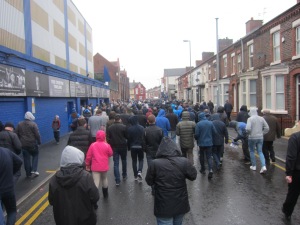 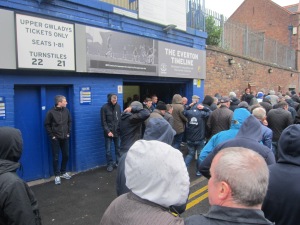 All in all – Goodison is a stadium which oozes atmosphere and history. But the home support was one of the most quiet I have come across. Footballing wise, well Everton deserved their 2-0 at the end with a good second half performance. Perhaps QPR lost belief going down to an unfortunate late goal in the first half. Some good stuff, but hardly a classic.