Having seen Stoke as well as Queens Park Rangers losing 2-0 last weekend, I found it fitting to go to London to see them fight out a real relegation battle. Defeat for the R’s and they would be all but out, defeat for the Potters, and they would really be in trouble.

I take an early train to visit the Chelsea museum before the game (review of that coming up). But once I have left the Chelsea ground and the visiting tourists there, I can’t help noticing the big difference between going to football in London and any other place I have visited. You just don’t realise that there is match on in London! Sheffield, Liverpool, Manchester are cities bigger than Copenhagen; and there is a buzz of anticipation around them on matchdays, certainly when you arrive at the main station. 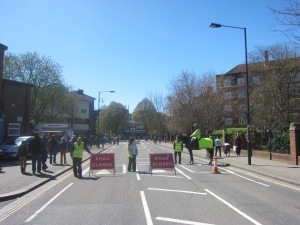 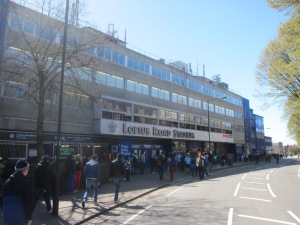 But not in London – despite the fact that there actually are three Premier League games on this afternoon. It is not untill I get outside White City tube station that I can see people on their way to the match.

Another striking feature is the number of tourists, who want to add football to their London visit. At least a hundred Scandinavians (mainly from Sweden), but also the Asians, Eastern Europeann visitors, Spanish and French tourists. I am pretty certain that the percentage of tourists is much higher here than at Manchester United or Liverpool, who are supposedly the main tourist-pullers. And the tourists there have come for the football. A few of the people at Loftus Road seem to have added football to list of typical English things to do while in London, without really being fans.

Having said that – I like Loftus Road. A stadium surrounded by housing on three sides, and therefore impossible to develop into a large, modern stadium. And it is a very small ground with a capacity of just under 20.000 spectators. The main stand – the one without housing bordering up to it and with reception and executive boxes – even has a number of uncovered seats. Fortunately, the sun is shining on this first real spring day in the UK. 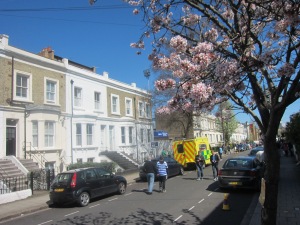 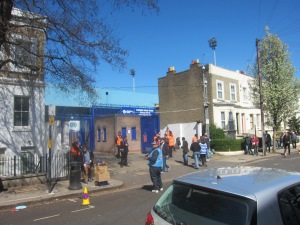 The local supporters seem to bear their pligth with diginity. I chat with a couple of QPR supporters (who are actually up from Cornwall, but it is traditional family thing to follow the Rs) and they are not – as you would expect – blaming owner or manager or bad spending in the transfer market. They just recognize that things have gone wrong this season, confidence-zapping defeats with late goals conseeded being the order of the day. They hope that the manager will stay on – and as many of the players as possible. After the match, I hear a boy worrying that all the players will leave now that they are doomed to relegation, but the father comforts him saying that no teams in the premier league will want to sign any player from the QPR side – except Remy and Samba. Some comfort.

To add to the friendly atmosphere around the ground there are info-points where smiling girls ask people if they need help to find the right place, and the security guy who checks my bag exclaims “What a lovely weather today – oh, you have brought books?” “Yeah, I have been reading on the train from Manchester” “So you are from Manchester?” “No, Denmark actually. But I am based in Manchester this month from where I am groundhopping”. He then asks me about the matches I have been to and plan to go to. Not often you come across security as friendly as that. 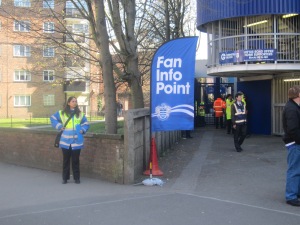 Inside the ground security are friendly as well as attentive. The guy seated next to me does not look up on the field at all for the opening 15 minutes. He just stares at his feet – seemingly doped or something. Security spot it. A number of people, including policce, are called and have a look at the guy from a distance, discussing whether they shall pick him up, I guess. But he wakes up a little bit, groans with frustation as an attack breaks down – and they leave him. 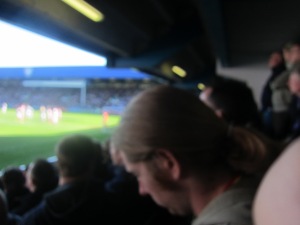 For QPR it is a repeat of last weekend’s match at Everton. They are the better side, but lack cutting-edge. And 4 minutes before the break, they go down against the run of play. In the second half they don’t believe in it anymore. When they concede a penalty and go two down, they give up – and are just running around aimlessly. They are going down. A shame, because they do try to play good football. 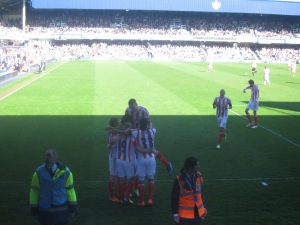 The feeling inside the ground is a bit strange. The Stoke away support is actually seated in the upper tier of my two-tiered stand. I can’t see them! And the vocal QPR supporters are standing in the corner in the opposite end of the ground. The chanting and singing are faint eccoes in the distance. But credit to the QPR fans. They keep up “Harry Rednap’s blue and white army for at least 5 minutes – and do most of the chanting in the first half. The Stoke fans give one Delilah, but are otherwise surprisingly quiet until things really begin to go their way in the second half. And the fact that they are above you takes a lot of the sound. 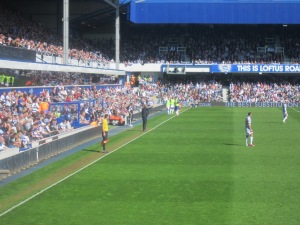 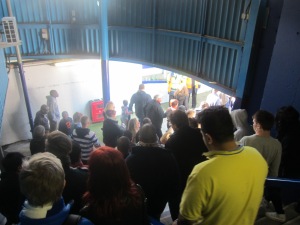 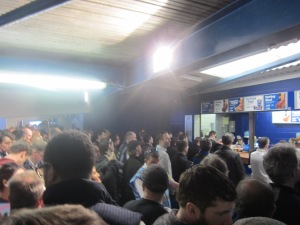 You really do feel how compact the ground is inside. I have to press my shoulders in between the two men sitting next to me, and there is not room for my (or my neighbour’s) legs. It gets even worse at halftime. The stand is not built for catering, but they have put in some stalls anyway. There is, however, no room for eating and drinking, let alone queing for the stalls. The interior of the stand is therefore one big traffic jam of people, who either want to got to the toilet of buy drinks – or eat their food before they lose it in the melé. 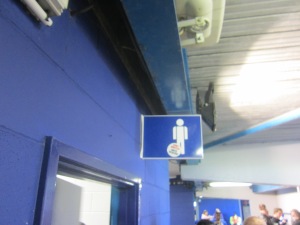 It also seems odd to have the away support above you. Particularly after the match, when the Stoke supporters leaving the stand cross a stairway above us. They could have thrown any sort of missile at us. When Manchester United come to town, QPR do, however, appparantely let the United support have both tiers at that end, as a fresh “Love United Hate Glazers” streamer outside the toilets is a signature from recently visiting United supporters. 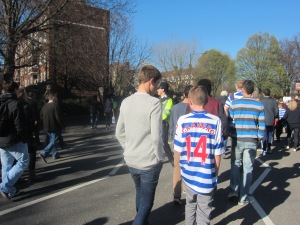 I had expected that it would take an hour to get on the tube after the match. But actually, the tube back to central London is not even jammed; but a handful of celebrating Stoke fans ensure that you are in no doubt that it is Saturday afternoon and time for football, even in London.