What is going wrong in the Midlands? The other week I visited Wolves, who are on the brink of becoming the first ever team to drop directly from the first to the third tier of English football – twice. Monday I saw Aston Villa plunge deeper into relegation trouble. And today I visited Leicester. I saw them beat Middlesbrough back in January to move second in the table, confident of promotion. But in their last 16 league games, they have only won twice, leaving them needing to win today to have a realistic chance of making the play-offs. 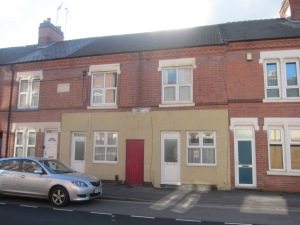 I arrive at Leicester station two hours before kick-off. There are not any signs of a football match being on. On the way to Leicester’s King Power stadium, built in 2003, I take a walk past the site where their previous and famous ground Filbert Street was located, tightly squeezed in between terraced houses. You can see the two houses, which served as entrance gates to the ground, only halfheartedly having been restored to their original look. A student’s college has been built on part of the old pitch, but the other is just laying waste. A sad sight.

Fittingly enough, you have to cross a powerstation to get to the King Power stadium. As modern stadiums go, it looks nice from the outside. Perhaps not as distinct as Molineux, but more coherent than that ground. There is a remembrance garden next to the river that runs behind the ground – there are people on the way to the match bringing fresh flowers. 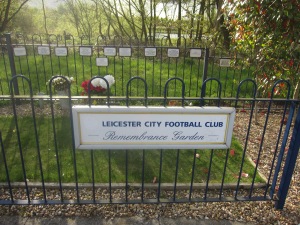 Outside the family stand, there is a stall with balloons and face painting for children – whereas there is no mounted police. And when you look at the people passing by, it does look more of a family event than most football matches. There are however, not many stalls outside. Only three of them are selling food – and only burgers. There are neither fish ‘n chips nor pies for sale outside the ground. 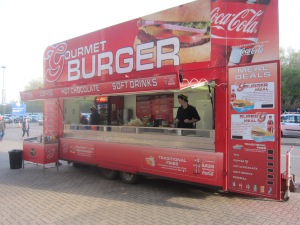 Having purchased my ticket, I meet up with club historian John Hutchinson. He has just shown a couple of visitors from Singapore around the ground, and is on his way to pitch side to make a radio interview about a heritage event on Sunday with Davie Gibson and Gordon Banks and a number of other former players. We walk through the players’ tunnel, and I am flattered as we encounter some of the staff that remembers me from my visit back in January. It enhances the impression of Leicester as club with a close, family like atmosphere.

John takes me to the shop, where Davie Gibson has been doing a book signing event. But, the publisher had only sent 50 rather than 500 copies, so Davie had left for the directors’ lounge before we get there. John leaves me, and I take up my seat at what is called the Kop end, bringing the name from the old ground despite nothing separating this end from the rest of the ground. This is the first time I have entered a stadium withouth anybody wanting to search my bag. 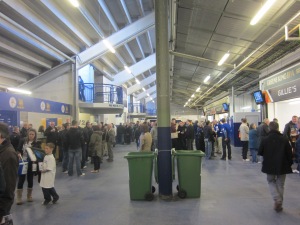 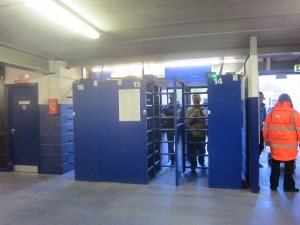 I like the interior of the stand. Spacious, a bit like the old stand at Goodison Park. And here I do manage to get a chicken ‘n mushroom pie. The catering staff reflect that Leicester is the ethnically most diverse town in England, but you wouldn’t be able to tell from looking at the crowd, which is 95% white. Just as striking is the number of women of all ages, not only accompanying men and children, but also going in twos, threes and fours to the games. 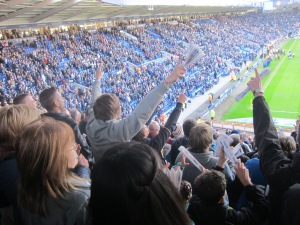 To generate as much noise as possible, Leicester have put clap banners in all seats for the spectators to use for clapping. John predicts that they will probably end up on the field as paper planes, and some do, but even more end as confetti being hurled into the air. Whether the clap banners make a difference or not, I cannot tell. But the crowd is surprisingly noisy even before the players enter the field. Everybody seems to use the clap banners to make noise, and led by pockets of supporters (mainly young men) standing throughout the match, there is also quite a lot of singing and chanting.

For the first twenty minutes you do not really notice the away support at the other end. Leicester enjoys most of the possession, but in the opening half hour, Watford look sharp on the break and create more and better chances, and gradually the noise level drop. Around the half hour mark, Leicester do get 3 or 4 half chances, and that lifts the crowd again. But four minutes from half time, Watford strike. First Schmeichel makes a great save after a quick Watford break, but the resultant corner is only half cleared, and the ball is played across goal once more and tapped in. While Leicester are still reeling from the disappointment, Watford go two up with a stunning strike from 30 yards in the top corner. As you can hear the taunts from the Watford supporters, the Leicester fans mobilize a few defiant chants and songs before half-time.

I am surprised that the Leicester fans still seem to be in relatively good voice as the second half gets under way. They do have a single chance, but overall Watford again seem more dangerous on the break. But then after 20 minutes, Leicester do find a way back, as a cross is knocked on to their substitute Hale, bordering on off-side. That gets the crowd going again and they manage to lift Leicester and knock Watford out of their stride. I leave the ground in injury time to make sure I get on the last train back to Manchester. Outside, the sound of frustrated growling from the ground and subdued cheers from the away end tells that Leicester don’t manage to get an equalizer.

All in all, I am impressed with the atmosphere at the ground. Maybe it was a last hooray, with the match being the last home game of the season and the last chance of getting back into the promotion race – as far as I could hear, the Watford fans were singing “2-0 in your cup final” at the end of the first half. Or maybe it was the clap banners that made so much noise, but in truth were rather annoying – particularly during the pre-match sing along to “Hey Jude”. But nevertheless it seemed to be one of the noisiest grounds, I have visited so far, probably also helped by the architecture, which makes the sound float around the ground – and not vanish into giant roofing constructions like at Old Trafford or into the open air at Molineux. But you do wonder, why the ethnic diversity of the city is so poorly reflected in the crowd. Perhaps because the noisy atmosphere, after all, is still fairly aggressive, despite all the families and women going.