To me and probably many other Danish football fans my age, Wolverhampton Wanderers will always bring back memories of winter Saturdays spent in front of the television, watching Derek Dougan or Kenny Hibbitt in action on a muddy field with the characteristic 7-pitch stand in the background.

Nothing remains of the football ground of the 70’ies; the present four stands have all been completed within the last two decades and made Molineux a modern state-of-the-art stadium. But in contrast to some other modern stadiums, there is a special feeling to it: The elegant yellow bricks walls and marked orange steel constructions, the seating in yellow and black with the ominous Wolves logo, the curving Billy Wright and Steve Bull stands, and the Jack Harris stand build into the hill, where the imposing terraces of the South Bank used to be.

In 2008 plans were put forward to rebuild the stadium and fill out the quadrants between the stands to knit them into one big construction – but as it stands, Molineux differs from most other modern stadiums with having four separate stands.  There is a family feeling around the ground. In the brand new Stan Cullis stand from 2011 there are baby change facilities, accessible toilets, and whereas other grounds threaten spectators with arrest if they take alcohol into the stands, the signs kindly ask people to “Drink up. Please don’t take alcohol past this point”. Judging from the menus, the catering also looks more diverse (and healthy) than in many other grounds – and the walls inside are decorated with art. The location of a hairdresser at the ground only adds to this family friendly atmosphere.

You are greeted with the same sense of a family club when you enter the purpose-built museum in the Stan Cullis stand. A film of Wolves fans of different age, gender, ethnicity express their loyalty and passion – “We are Wolves”.  Once you have entered through a turnstyle, you can choose between an activity area, a chronological presentation of Wolves’ history  or skip to series of thematic displays ending in a hall-of-fame. 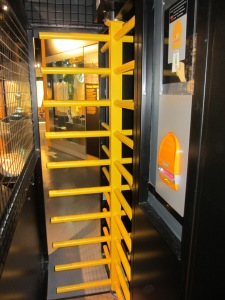 Chronological presentations quite often become rather tedious in museums. Allowing chronology rather than objects to structure the room, objects are often reduced to props to illustrate the essential text. And it can quite easily generate museum fatique, as visitors sense that they have to keep walking and reading for a considerably distance before coming to the most recent and probably most interesting  sections.

But in this case I found it captivating. It is not that the objects on display differ that much from objects in similar museums. They consist mainly of tickets, teamsheets, programmes and posters from matches; shirts, boots and the odd football from the players; cups, medals and pennants from big matches; football cards and postcards;  a few rosettes, scrapbooks and other fan’s memorabilia. Supplemented by odd items such as a seat from the ground in the 1930’s, celebrity fan Robert Plants Wolves Head, and, the star object: a diary from a European tour in 1938.

So why did this “standard” set of objects work so well?

Firstly, the design was inviting, the golden background creating the Wolves atmosphere and at the same time forming an aesthetically beautiful background to the wonderful old black and white photos.

Secondly, the photos were brilliant. For instance the 19th century photo of the Molineux pleasure gardens opens in a wonderful way the story of the club finding its home .  Or the Immortals team from around the century. There are football cards from tobacco boxes, international postcards from the 1930’ies-50’ies, fans’ photos from the cup glory in 1973.

Thirdly, with the help of small details, the individual sections quite often elegantly relate to the big story. That is particularly the case with the 1938 diary. But the clubs origin and finding a home in the Molineux gardens gives you a distinct view of emerging football in the 1890’ies; the second world war features – the sixties (with Wolves joining the Monkees on a tour in the states); etc.

Fourthly, the objects are displayed in an excellent way. For instance, the first three showcases you encounter show a shirt and boots from the 50’ies, 80’ies and 2010’s respectively. The showcases are designed as dressing room walls, and beside these central items, you find soapboxes from the respective decades. In other showcases it is a transistor radio or a television set from the 1950’ies . 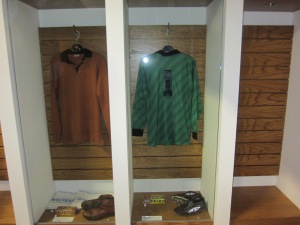 Fifthly, the story of Wolves form a strong narrative with ups and downs – and quite interestingly it seems the story was intended to end on a high with Wolves being back in the Premiership – only for the relegation in the summer months before opening to add another twist in a dramatic tale. A tale that oozes with pride because of it. We are Wolves – and we are not just glory seekers. It also adds authenticity to the museum. A football club’s life consists of ups and downs – without downs, no ups. The chronological part ends with the “We’re Back” story – but in the last few lines, it has been added that Wolves was relegated at the end of the 2011-12 season. Ups and downs – and authentic pain. Or as a quote in the exhibition says: “It’s like being part of a very big family. Sometimes your family makes you smile, sometimes they make you cry and sometimes they make you feel very proud”.

In the middle of the chronological exhibition, some of the main characters have got their own showcases. Stan Cullis, Billy Wright, Derek Dougan, John Richards, Steve Bull, and Sir Jack Hayward. Other players are mentioned, and objects relating to them featured. But the Wolves museum has resisted the temptation to overdo it and present all their greats.

The chronological display gives a good reference guide to the thematic displays. These include the ground, fans, youth development, training methods, shirts and equipment. Again there are some brilliant photos and objects to lift most of the stories (although the youth development fall a bit flat compared to the others). Quite often, museums shy away from writing long texts, fearing that visitors will be bored. But here, stories are allowed to be told, as for instance the story of the surviving turnstyle from the old Molineux.

The exhibition features quite a few interactive installations, presumably to keep young visitors preoccupied while their parents or grandparents spend time on objects, photos and texts. There is a greatest fan quiz, you can challenge goalkeepers, take penalties etc.  I know I am not the target group for this – and I know that my son enjoyed the similar installations at the National Football Museum. But it does seem a little predictable, if not boring. And within a couple of years it will probably appear outdated and have to be replaced. 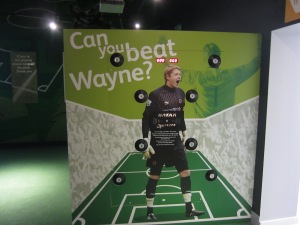 And that leads me on to the most negative aspect of the Wolves museum. The admission fee is £ 7.00. You can argue that other museums with similar state of art interactivities charge that – you can even argue that the Wolves museum is much more advanced in this area than, say, Arsenal, Liverpool and Manchester United. But – these clubs attract foreign tourists in their thousands. The exhibition at Wolves will mainly appeal to locals – and to charge that much of your local fan base seems rather problematic.

I think the Wolves museum would be better served catering for the local audience. Making more fans’ displays, or perhaps thematical displays about the social changes to football over the decades – or perhaps like the National Museum of Liverpool dedicate three showcases to fanzine editors and ask them to update them frequently, and make it a venue for fans to meet. And perhaps make that possible for fans by making tickets valid for a year – and perhaps reduce the price.

Favourite object: The diary from 1938 tells a remarkable story – but it is not the visually most appealing. The price for that is the giant Wolves crest sculpture on loan from Robert Plant – again accompanied with a great quote: “I don’t need the money. You can only have one car and one Wolverhampton Wanderers season ticket”. Well, many present day footballers wouldn’t subscribe to that – but coming from one of the great rock stars, it puts (some) modern footballers’ lifestyle into perspective. 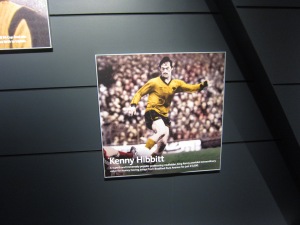 Character: So which player can sum up the Wolves museum? He may not have made it into the small group of special ones in the exhibition – but it has got to be Kenny Hibbitt. Images of Kenny Hibbitt passionately and unorthodoxly weaving his way through a crowd of players on a muddy pitch at Molineux kept cropping up as I wandered around the exhibition. Pride, passion, dedication, great effort – with a couple of wonderful goals thrown in. I just HAD to buy a 1976 Wolves shirt on the way out!