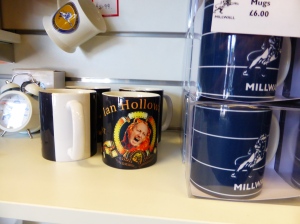 The first two cabbies wouldn’t take us, when I told them our destination. The Lions’ Den – home of Millwall F.C. Back in the 70’s and 80’s, Millwall really had a bad reputation – I remember reading about “Dangerous Alley” with no escape routes leading to the ground. But in 1993, Millwall became the first club to move to a brand new all-seater stadium( after the Taylor Report in 1989).

The new Den is just a few miles down the road from the old one – and I must admit that the combination of the cabbies’ reluctance to take us and the desolate industrial buildings we passed as we approached the ground, made me wonder whether it was right to take my son to this game. Compared to, say Loftus Road or Craven Cottage, the Den is situated in the most uncharming way, right in the middle of the intersection of two railroads.

From the ticket office, we went to the Millwall cafe – part of a garage complex next to the ground. At the big premier league grounds you won’t get the possibility of walking  straight into a club cafe 90 minutes before kick-off for lunch, but here we could. We got our fish ‘n chips and sat down at a table with a senior Millwall supporter. He had gone to his first match back in 1946, having to crawl over bombcraters to get to the ground, which was also in a poor state. And he had been going ever since. Recently, though, the neighbourhood had become quite fashionable, and that had changed things. I asked him about the move to the new ground. “Well, it is still plastic” he said. But added that there was something special about the old 20.000 capacity ground, when 30.000 people were packed inside it. He asked to see our tickets, and then shook his head. No, we should have gone to section 8, 9 or 10. That were best sections in the ground. We promised to go there, next time around. He was quite resigned to going down into League One – and in general pessimistic about the future, fearing a collapse like Portmouth has suffered. 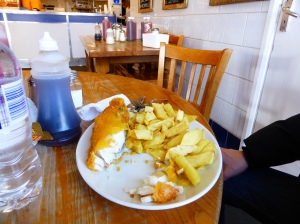 Looking around the cafe, the FA Cup final appearance in 2004 was clearly the latest highlight in Millwall’s history. There were a lot of memorabilia from that final. And, like all other true fans, the Millwall fans cherish their history. In the car park around a purple doubledecker bus, people were gathering, and suddenly former players appeared in the area, signing autographs and chatting with people. Which attributed to a nice atmosphere. There was nothing aggressive, and in fact, Blackburn supporters had been seated in the cafe alongside Millwall fans. The most striking aspect was the almost 100 % white crowd; apart from a number of stewards, I didn’t see anybody of another ethnic background. 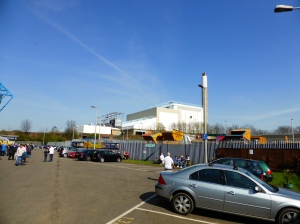 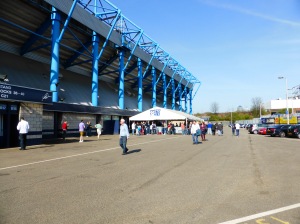 About half an hour before kick-off, we went inside the ground to find our seats. Being twenty years old, the ground in some ways resembles the old grounds from the middle of the 20th Century, with four seperate stands instead of the modern bowl shape. Not very charming, with the barren surroundings not making it any more pleasant. But still, with a bit more character than, for instance, the Reebok in Bolton. And with a more “English” feel to it. 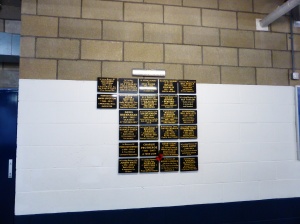 The concourse was rather boring, despite a few attempts to ‘personalize’ it through photos of former players and memorial plaques. But the things that stood out were the freshly baked pies. Not the same industrial products you find in most grounds. Even though I had had my fish ‘n chips, I just had to try one of them at the halftime break – and it didn’t disappoint. 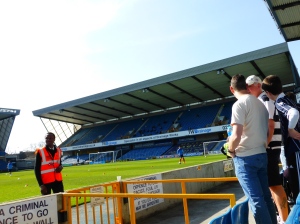 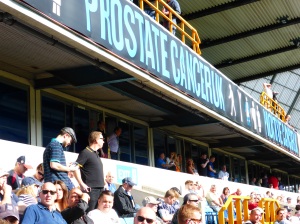 Our seats were in the third row, very close to the pitch. But then there were no more than 7 or 8 rows in the lower section of the stand, the upper stands apparently holding most of the crowd. Between the upper and lower tiers, there were executive boxes all along the ground, although most of the guests in boxes apparently preferred to watch the match outside rather than inside the boxes. In general, they didn’t look like the corporate segment that you find at premier league clubs, more like “real” fans. One of the main sponsors judging from the advertise hoardings was “Dean Wilson funerals. Our Family Caring for Milwall Families 24 Hours A Day”. Along with the many signs warning of criminal offences, the funeral advertisement added to the feeling that Millwall still has a lot of branding work to do to get back to the top flight. 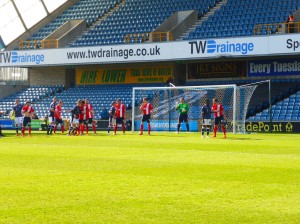 When you are at the foot of the table, and fans, manager and players alike seem resigned to going down, it is, perhaps, hard to generate a vibrant atmospheshere inside the ground. Less than 9000 turned up, but it was not just Millwall fans staying away. This is the second time I have seen Blackburn away in the Championship, and they must have the poorest away support of all, with no more than 200 travelling fans.

Although Millwall started the match quite positively, the chants from the home support were rather few and far between. But we did get to hear their trademark “No one likes us, we don’t care” to Rod Stewarts “I’m Sailing”. And “MMMM”. 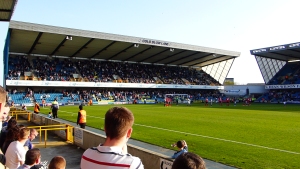 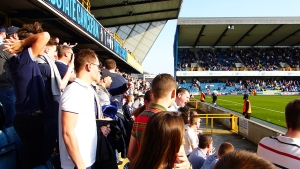 In the second half, things really livened up. Millwall took the lead from a penalty, which also saw Blackburn having a man sent off. The Millwall fans, sensing a possible win, found some voice, only for Blackburn to equalize from a corner. Groans of frustration started to fill the ground – my son has never heard as much swearing and foul language! But two minutes from time, Millwall got a second penalty and regained the lead. Only for Blackburn to pull off another dramatic equalizer 2 minutes into injury time. Cue more swearing and frustration. 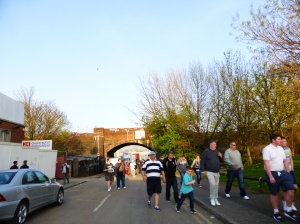 Still, although the “Wise security” (anything to do with Dennis Wise?) prepared for a pitch invasion, there was no trouble at all. Only frustration. After the match we went looking for a cab. But couldn’t find one. Which perhaps shouldn’t have surprised us, considering how difficult it was to find a cabbie who would take us there. Finally we caught a bus to the city centre after quite an entertaining day. Still, The Den is not really a welcoming place, the location and ground design having a lot to do with it. A collectors’ item for a groundhopper – but not really a place to take your family to have a pleasant day out.