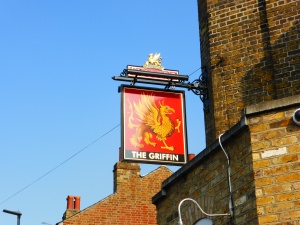 In the match programme for the night’s game against Norwich, the Brentford chairman Mark Devlin wrote: “Most teams we face have not been to Griffin Park for a number of years. The throwback to an old, traditional stadium, with its terracing and the obvious attrations of the four corner pubs menas that we can expect sell outs in the visitors stand at almost every match this season.”

Precisely. A throwback to a traditional stadium with terracing at both ends. The way the stadium is tugged behind terraced housing with the remarkable feature that there is a pub at each of the four corners of the ground. That is why Brentford was high on my list of stadiums I wanted to visit.

Nevertheless, the club is about to start building a brand new 20.000 all-seater ground close-by. So much for the attraction of being a traditional stadium. Judging from an image of the planned Lionel Road stadium, the new ground looks just as soulless as most modern stadiums.

Of course, a modern ground has advantages. Toilet facilities. Executive boxes and possibilities to generate income from corporate events. A bigger souvenir shop and batter catering facilities (although most catering facilities within football grounds sell crab food anyway. In fact, the best pie I have had in a football ground was at Fulham, one of the oldest grounds, so new facilities do not mean better standards). As Brentford were in deep financial troubles some years ago, I guess that the move must be seen as part of a strategy to secure a more viable economy.

Perhaps just as importantly, Griffin Park does not live up to Premier league standards, if Brentford should succeed in winning promotion from the championship. The current capacity of about 15,000 will, far from being big enough for the premiership as such, have to be dramatically reduced, if the ground is converted to an all-seater stadium (In fact, the capacity was slashed from 37.000 to 9.500 during the 1980’s). But on the other hand, a 20,000 capacity in the new ground would also be too small, if the club was to win promotion (although there apparently is an option to expand it to 25,000). And then again, Brentford may go down to League 1 rather than up to the Premier League. And in that case, the current facilities seem adequate.

Anyway, with only a couple of seasons of football left at Griffin Park, I can only recommend football fans to go there, while it is still possible.

According to Simon Inglis, the really incredible about Griffin Park is the fact that the houses in New Road and Braemar Road had been there for some 20 to 50 years, when Brentford in 1904 rented the ground from the local brewery and built the stadium. 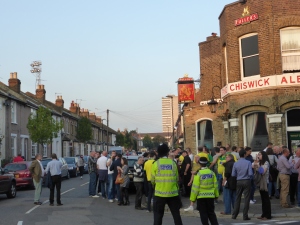 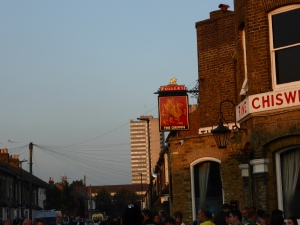 The floodlight pylons are the only indications of a football ground, when you look up Braemar Road from Brook Road. That is untill a couple of smartly dressed footballers arrive for the match with football boots in their hands, and a couple of policemen take up their position.The number of visitors to the Griffin pub on the corner of the street gradually increases, with canary clad Norwich supporters mixing with the home supporters.

When you proceed down the road, the stadium suddenly appears, as apparently a couple of houses have been torn down to make the ground visibile and to create a forecourt for people to gather. And in one of the next houses, a souvenir shop also indicate that this is not just a residential area. 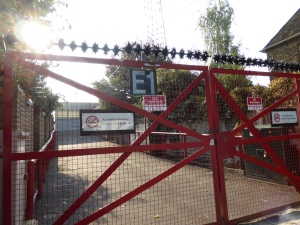 On the corner of Braemar Road and Ealing Road, you find the next pub – the Princess Royal. Proceeding down the Ealing Road, there is no entrance to the stance, only an exit gate paved between the houses. 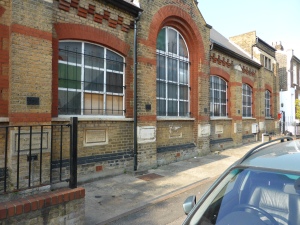 On the next corner – of Ealing Road and New Road, you find the The New Inn. Again, there is hardly anything that gives the stadium away except the pylons. On the side of the road opposite the ground there is an old methodist chapel.

In the middle of New Road, another house has been sacrificed to create an entrance to the ground. They have not – like in Kenilworth Road or the old Filbert Street opted to make the entrance through the house. But if they had, it is likely that nobody would notice the ground at all. 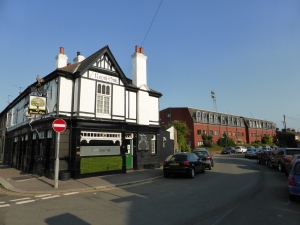 I get to the last corner and find the Royal Oak. And suddenly the scenery changes. Two blocks of modern flats look completely out of place at the Brook Road end. There used to be a carpark, but as half the Braer Road main stand was destroyed by a fire in 1983, the club had to sell it off to raise money for the rebuilding. Still, though, it is hard to see the ground, apart from an entrance for the away supporters (who take up the Brook Road end) and a small car park for flats. Here you can see a red steel skeleton of the rear of the stand, whcih was dismantled in 1986. It looks like it is trying to keep the encroaching houses in New Road at bay. All adding to a bit messy but very charming appearance.

Having walked round the ground, I take a drink at the Griffin. A local supporter tells me that this is the only ground with a pub on each corner. “Yeah, I have been round to see the four of them”. “Well” he tells me, “you are supposed to have a drink in each one before the match”. I do not have time for that, though. My cousin and his wife are coming around for the match, and we are to have pre-match meal. The Griffin seems to be the best bet with burgers being grilled in the back-yard. And they are, in fact, quite good.

Having entered through the turnstyles to the forecourt, my cousin and I opt for a pancake for dessert before making for the Ealing Road stand. I had purchased my ticket for the standing section before knowing I would have company for the match. And I really relished the thought of standing on a good old-fashioned terrace again. But as it was my cousin’s wife’s first match, perhaps it would have been more convenient with a seat. 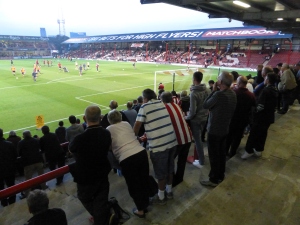 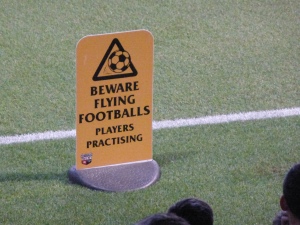 When we get onto the terrace, all the places along the cruch barriers have been taken. Giving people something to lean onto. There is a very intimate atmosphere. The ground is small, you are close to the pitch – and standing up make you feel even closer. “Beware flying footballs. Players practising” a sign tell us. And it is right. The crowd behind the goal is being peppered by wayward balls. No net to protect the spectators in the seats. We are part of it. 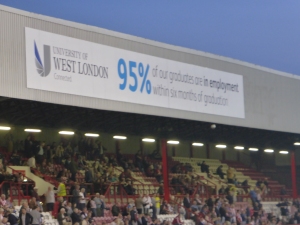 The stewards are quite strict that you are not allowed to stand in the gangways. I try to lean on the corner of a crush barrier, but as one my toes touches the white paint in the gangway, a steward tells me to move. Griffin Park is famous for selling huge adverts on the roof of the stands that can be seen by flights approaching Heathrow. The one roof, I can see, is taken up by a betting company. I cannot see the advert on the other roof top, but on the front it is the University of West London. A stark contrast to The Den, where the corresponding place is taken up by the local undertaker. Perhaps it tells you that we are in a more well-off part of London. 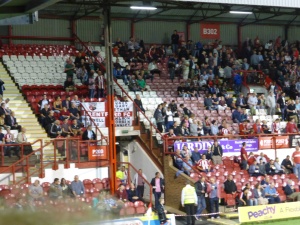 Apart from being recruting ground for universities, the crowd look a family crowd, with a number of women. Still, when the match kicks off, I find that although we are a long way from Millwall, we are also a few miles from Fulham that I visited recently. At Fulham’s Craven Cottage, the groaning home crowd was shouting “oh no!”. Here at Griffin Park, it is “For fuck’s sake”. When a home player made a mess of things at Craven Cottage, he was treated to a “You tosser”. At Griffin Park it is “you wanker”. Especially Norwich’s Swedish full-back is treated to this chant after he appears intent on kicking a Brentford player but stops in his tracks in the nick of time and escape a sending off. Boos and jeers whenever he is close to the action. And it seems to affect his came as he puts a couple of simple passes out of play. Which encites the home crowd to turn up the volume against him.

As the match kicks off, the lights in the stands are turned off. Maybe it is just my imagination, but the atmosphere seems better for a crowd this size than in an all-seater stadium. Part of the reason is that friends are standing close to each other, chatting – and groaning together – instead of being spread out on seats around the ground. But you somehow feel closer to the action. Also because of the lights in the stand being turned out. And I am pretty certain that a home goal will send the entire stand jumping with joy bringing us even closer to each other.

Unfortunately, it is only the away support down the other end, who get the opportunity to jump for joy. Three goals in the final 20 minutes see them win 3-0, which is a bit unfair. Just before Norwich’s second goal, Brentford have a shout for a penalty turned down. The crowd is furious. “You don’t know what you are doing”, “wanker”, “you’ve better run for the tunnel”, “2-0 for the referee” are just some of the chants coming up.

As we leave the stand at the end of the match through the passage to Ealing Road, I pass a sign thanking me for my vocal support – and then it tells me to be quiet now, as this is a residential area. Most of the Brentford supporters are pretty quiet now. But I guess that wouldn’t have been the case, had they won the match.

This is football in the traditional way. Hurry to Griffin Park before it is too late.