If football had been invented today, Nottingham wouldn’t have happened. Two top football grounds only separated by the River Trent. And – on the Notts County side admittedly also a carpark. Today, they would have gone for one club and either built a parking house or a shop/and shirt printing centre. But there they are, two grounds crammed in close to the city centre. Notts County’s ground, Meadow Lane, was in fact completely rebuilt in the 1990’s. It shows – massive, ugly, grey constructions. But compared to other new 90’s stadiums, they have somehow managed to keep their own identity 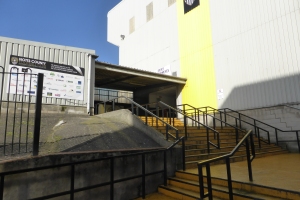 They have put up the text telling that this is the oldest football league club. They have kept a foundation for the Spion Kop end that indicates what a kop-stand used to be. And they have memorial plaques for deceased fans on the stadium wall 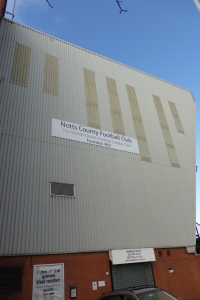 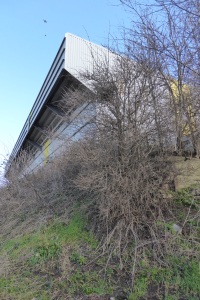 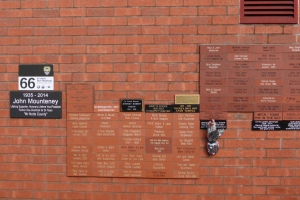 You get a sense of history, of tradition. Notts County fans have been here for more than 100 years. The exterior may look different, but there are historical roots here.

And, in fact, the Nottingham Forest supporters club welcomes visiting fans inside.

Nottingham Forest’s City Ground is arguably one of the most beautifully located grounds in the country. Right on the banks of the River Trent, The Trent End stand has also been built in the 1990’s, but it still looks good from the bridge across the river, whereas the Brian Clough stand, which is also from the 90’s is rather drab looking. 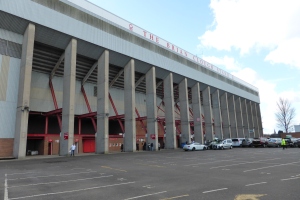 The Bridgford Stand and the main stand are not quite as drab looking, and what is more, there is plenty of life around. 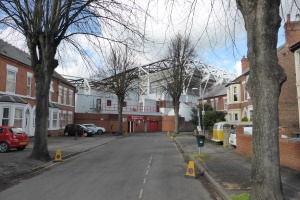 Pubs, shops, houses, stalls. The stadium and the surroundings are organically connected – certainly compared to modern grounds built in the middle of nowhere.

You sense that Forest is a big club. The stuff sold from the stalls, old supporters with badges, pins and scarves seventies-ish style. And it is really a social event. People know where to gather to chat with friends.

Normally, I would go for the fish n’ chips, but the queue is so long – and I stay in Crewe with the best fish ‘n chips shop I have visited – so I go for a beef burger near the ground. While I eat, I decide to make a completely unscientific research into the crowds demographics. I look count the first 100 fans to pass me according to gender and etnicity. Result? Exactly 90% male and 10 female. 100% white. A random test – but I have seen nothing to suggest that it is widely off the mark. I think Manchester United and Arsenal are the only grounds I have visited, where it has not been the case. 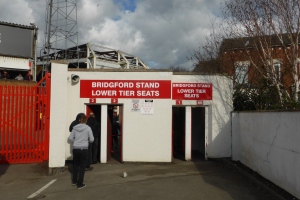 I have asked for a ticket to the part of the ground with the best atmosphere, and I am put in the Bridgford Stand that used to be for visiting supporters only. Now half of it has been allocated to home fans. I am put almost in the front line towards the Bolton fans. There are two tiers in the stand.  A net is hung to prevent supporters from the upper tier throwing missiles at the away supporters. 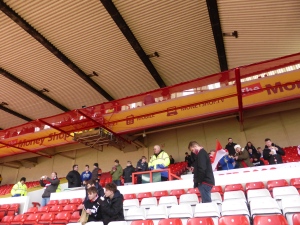 Most of the supporters in this section are young (and white male! – although not all of them). I guess that they have ‘just moved’ in and now constitute the avantgarde in relation to the away supporters. Certainly, in the second half as Forest are safe with a three goal cushion, there is a bit of banter between our section and the section nearest to us in the main stand, also Forest supporters. Like us, they are standing throughout the match. 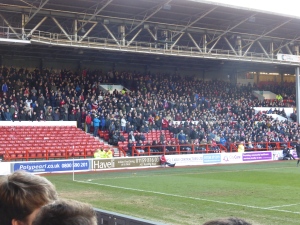 That, however, was in the second half, where the Bolton support had resigned to defeat. Three goals down, down to ten men with their captain sent off, their goalkeeper and one defender stretchered off – and former Forest favourite Emile Heskey in an unlike position as central defender. “Englands, number five, England’s England’s number five” is the chant toward him. More provocatotive are the chants “Heskey, give us a wink” from the Forest fans that he actually responds to. 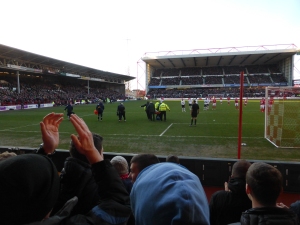 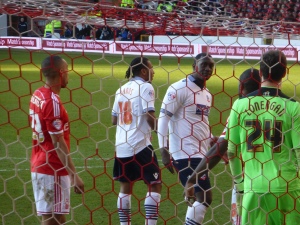 Forest had taken an early lead – a lead which was doubled by an incredible solo effort from Forest star Antonio, running half the length of the pitch, beating three men in the process, before belting the ball into the top corner. So the atmosphere is brillant in our section. Singing all along, chanting at the Bolton support in the first half, and the A stand in the second. 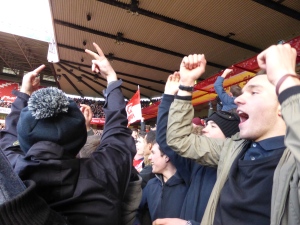 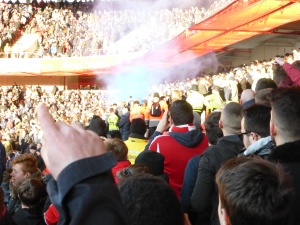 With Forest winning 4-1, the sun even shining for part of the half, plenty of good actions, a phantastic ground,  and a 20.000+ crowd , the ingredients were there for a brillant footballing day. And it didn’t disappoint.