Having visited Bristol Rovers, a “homeless” team on the Tuesday, I moved on to something almost just as extraordinary. Exeter City, a club saved, owned and run by a supporters’ trust.

The story of the supporters’ take-over is quite remarkable. The club had had quite a few troubled times before. It had been hit by sanctions for not being able to field a team and for getting more financial help for ground improvements than entitled to. Still, the club invested in two new stands in 2000 and 2001 – probably not helping club finances. 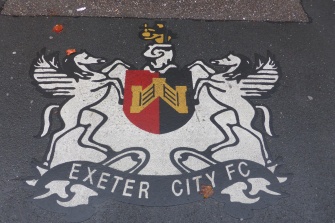 The 2002-3 season turned out to be a bizarre culmination of the problems. Uri Geller had turned an Exeter fan because of his son, and he wanted to help the club out. Allegedly, he put crystals behind the goals to help Exeter in an important match. They lost 5-1. No one can tell, what the scoreline would have been without the crystals, but Geller decided to try and help out with running the club as co-chairman instead. He brought in a couple of entrepreneurial directors, Russell and Lewis, signed the former Manchester United star Lee Sharpe – and persuaded his friend Michael Jackson to give a concert to help the club. Jackson – who had visited Fulham a couple of years earlier (and this, his first attending a football match ever prompted Fulham owner Al-Fayed to have a statue of Jackson erected outside the ground!) – made it a condition that half the revenue should go to charity for children suffering from HIV. But come he did. Along with the magician David Blaine

What happened to the money, is not quite clear. By the end of the season, the two new directors were arrested – and later convicted for fraud. Allegedly, they took match receipts home with them and used them to fund property investments in Croatia. To top it all, Exeter were relegated from the football league on the last day of the season as well. And that was when the supporters’ trust took over.

Still, the club was troubled by debt – but then lady Luck appeared. Not in the shape of Michael Jackson, a magician or Uri Geller – but the shape of Manchester United in the FA Cup third round at Old Trafford. Exeter managed a goalless draw and were rewarded with a replay – and along with the two matches lucrative TV-deals. This wiped out the debt with one stroke – although the fight for tickets for these matches allegedly caused some bad feelings within the Exeter community. No wonder there is a Manchester United room in the ExEC 100 Club in the old Stagecoach stand of the ground.

But how does all this show in the ground? Well, first of all, it is very relaxed and friendly. One of the groundsmen went round the ground 3 hours before the match in a 1990’s Manchester United jacket! But then again, United were indirectly the clubs’ biggest benefactor. The players were wearing red hoodies as the arrived at the ground – not the suits that most clubs order them to wear. 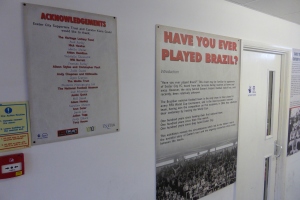 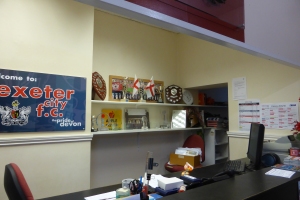 There were no guards keeping people away – only a parking warden. The door for the “Players Entrance” was wide open, and I just walked in and could read Kiera Gould’s fascinating wall-display on Exeters trip to South America in 1914. And when I asked the girl at the reception for permission to take photos of the trophies on display, she called somebody to take me around the ground to see the others as well.

And that leads me to the second point. There is a proud sense of history. There is a memorial for the players, who lost their lives in WW1, but even more noticeably, the club takes pride in the 1914 trip to South America, where they became the first team ever to play a Brazilian national team. There are plaques, displays, Brazilian flags, photos from a centenary match in 2014 – and the clubs centenary match back in 2004. There are signed Brazilian shirts – among them one signed by Pele (sorry about the quality of the photo) – on display in the ExEc 100 club. 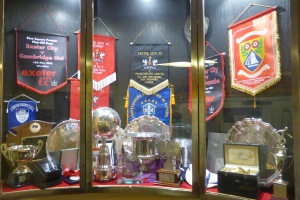 Along with Brazil, Manchester United feature heavily. In the main display cabinet, is a pennant from the 2005 match. In the executive club, there is not just a room with relics from the 2005 matches, there is also a signed programme from Manchester United’s previous visit in 1968. And in a hospitality room, there was a huge photo of George Best in action at St. James Park in that match. 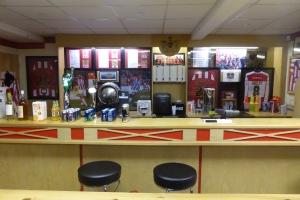 And as mentioned, The ExEC 100 club have their rooms in the Stagecoach stand – with their own bar – in the place where most top clubs would have a directors’ suite or hospitality facilities.

Before all the drama of 2002-3, the local council had stepped in and purchased the ground – to make sure that the club could survive. Apparently, the council also helped the club out by giving it the neighbouring building of St. Sidwell school. So offices, corporate facilities and an additional fans’ bar are squeezed into a former school building. 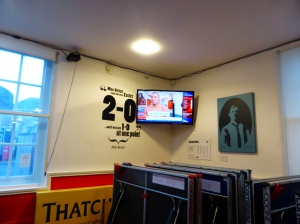 The relaxed atmosphere in the bar is enhanced by the printing of football quotations on the wall. One from the Manchester United match, football pundit (and ex-United player) Alan Brazil pointing out that “Manchester United could only beat Exeter 2-0 … and it was just 1-0 at one point.” And another Alan Ball’s “The important thing is that he shook hands with us over the phone”. This is not about glory; it is about having a good time. Before the match, the corporate facilities are used for courses for social workers 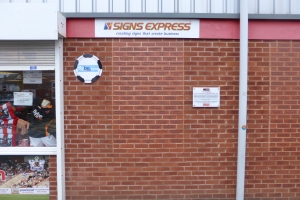 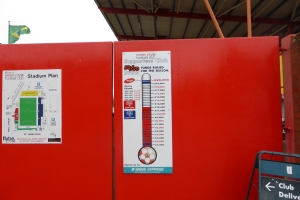 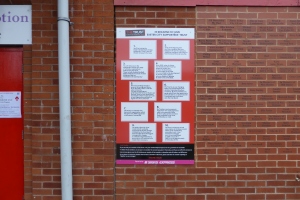 There are several appeals for funding – and acknowledgment of those who have contributed at various times.

There are also several ways to show photos of fans, players, matches etc around the ground – some of them a bit unconventionel.

The merchandise on sale in the souvenir shop is not quite as streamlined as in many others. 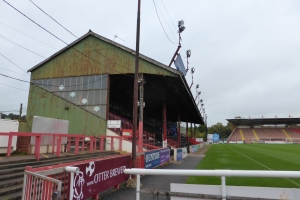 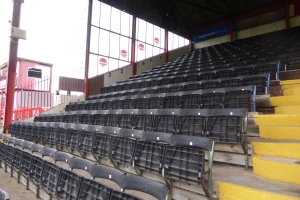 I come just in the nick of time to see the old grand stand from 1926, the Stagecoach Stand. It will be demolished at the end of the season and replaced with a modern one. “It is sad”, my guide says, “But necessary”. The old one costs a fortune each year to get through safety and fire inspections. The seats are placed on wooden decks, which are in a very bad state.

In fact, the stand was built the year after its predecessor had gone up in flames. That was just five years after Exeter bought the ground as they entered the football league. They had been playing there as tennants since 1904 in what used to be a field lended out for fattening pigs, the proceeds going to charity.

To show how times have changed, it is no longer revenue from pig fattening that will finance the new stand, but university students. More precisely, the club will sell off some land behind the Big Bank for students’ lodgings. This is quite ironic, because in the early days the ground was too short, and a couple of opposing teams refused to play there because of this. So the club had a benefactor purchasing this land, so the terrace could be moved back and the pitch extended to required standard. 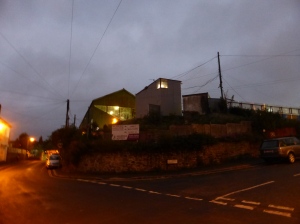 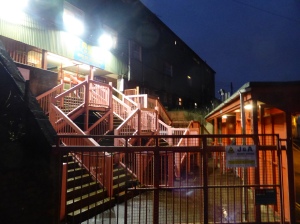 Especially when the floodlights are on, The old Stagecoach Stand looks like an ominous robber castle. It doesn’t extent the entire length of the field, as the ground is squeezed in so close to the railroad behind that there wasn’t room for a “full” stand, once the pitch had been extended to full length.

It is features such as this, that makes the ground special, as far as I am concerned. Grounds that have architectually taken shape after the surroundings – that have grown up organically within a neighbourhood. Like Griffin Park, Brentford or Kennilworth Road Luton. 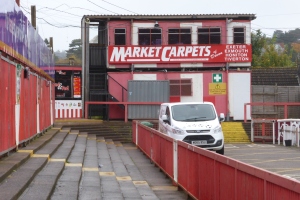 The neighbourhood-element also features heavily in the away end, as there is only a 9 step terrace holding 700 fans, enabling the houses behind it to have a perfect view of the pitch. For the visit of Manchester United, people offered huge sums to watch from the windows.

This is how the ground looks from the front door in one of the houses.

Modern stands cannot quite match this. But the Thatchers’ Big Bank from 2001 is still a throw-back to the all days, being currently the biggest standing terrace in the league with a capacity of 4.000 fans. It is, of course, a far cry from the Kop at Hillsborough in it’s prime with well over 20.000. But still, it is fine. Although it turns out that with no stand down the other end, the cold wind blows directly into the stand, making it quite cold. And then, of course, to someone my age, the name “Thatcher” doesn’t fit a supporters owned club’s main stand.

As matchtime approaches, I take a look at the food on offer at the Kenniford Farm Kitchen – and then opt to rush to an Indian restaurant round the corner for quick curry instead. I just don’t feel like burgers, which seems to be the only food on offer. 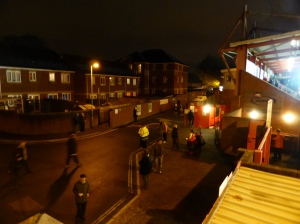 When I get back, there is more life around the ground – but not that much. The crowd is just under 3.000. I do my standard count of a random 100 fans, who pass me. 100% white, 81% male. I have to admit, though, that I didn’t count the 60-80 teenage girls who passed me to go to the players’ entrance. They were to dance on the pitch before kick-off – and seemed to hurry down into the dressing room rather than into the stand after the match.

Of the 3.000 fans, I guess half them were at the Big Bank. Here the percentage of men was even higher than the 81 – and there were at least a hundred teenagers with drum and all in the centre. As Exeter got off to a great start with an early goal, they made quite a lot of noise. But as Exeter failed to build on the goal, the sound of chatting voices took over. In the second half, they tried to rally for about 20 minutes of constant singing, but as their energy didn’t transfer into the team’s efforts, they gradually faded again. Maybe, also because of the cold. 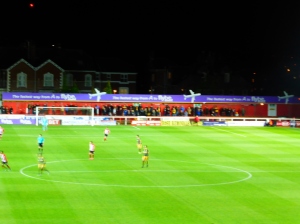 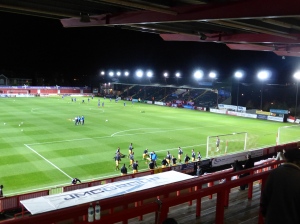 Down the other end, there were hardly more than a hundred Cambridge United supporters. We could only hear them a couple of times in the second half – but a group of them took part in a new fashion on flashing and waving mobile phone lights during the match. Well, it may not be new, but I haven’t really noticed it before.

The match ends with a 1-0 win for Exeter. Compared to the Bristol Rovers – Notts County match the day before (also two mid-table League 2 teams), the standard of play is extremely poor. It is littered by mistakes and bad passes – and both teams take to good old-fashioned kick-and-rush football as a consequence. And as the defenders look rather shaky, it does generate a goal and more chances than the good flowing match the previous day. In the second half, Exeter survive a handful of goalmouth scrambles – but maybe they showed a bit more of energy to make them deserved winners.

I head back to my hotel room – from where I stare down into the courtyard of the county prison. Despite the poor match, it had been a good day out. And I feel privileged that I got to see the Stagecoach stand before it will be demolished. I can only recommend fellow groundhoppers and football fans to hurry to Exeter to experience it this season.