When I started following English football, West Bromwich Albion were in the second division. Although they were promoted to the top-tier of English football in 1976, there have been a few ups and downs since then, and they have somehow always been ‘newcomers’ to me. Here at the Hawthorns, though, a plaque outside the ground reminds visitors that the Albion were founding members of the football league back in 1888.

And yet, the Hawthorns doesn’t really reflect that long tradition. The ground has, as many other stadiums, been completely redeveloped. The west stand (or Halford Lane’s stand) was built already in 1982. And after the Taylor report, both end stands were replaced in 1994, before the new, big East Stand was completed in 2001. There is not much around the ground that indicates that this has been a stronghold in English football for more than a 100 years. 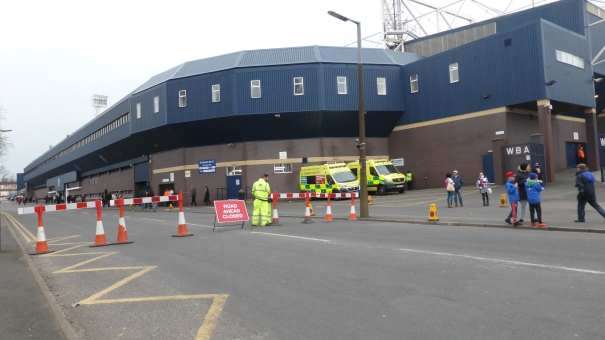 This first impression of mine is probably enhanced by decision to get off the train from Crewe at Smethwick Garton North and walk to the ground, rather than taking the train all the way to central Birmingham and change for a train to The Hawthorns. The walk from Smethwick take me across freeways and industrial sites. There is a constant noise from cars. 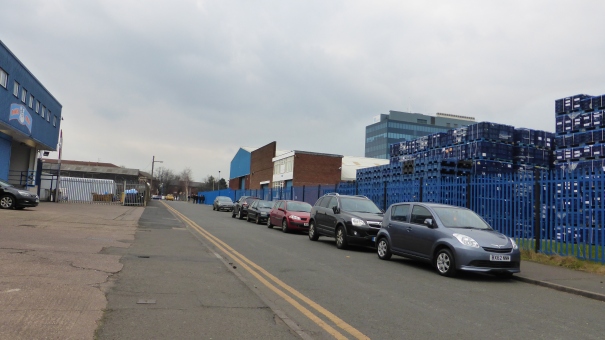 Even as I approach the ground, the traffic is the dominating feature. Many old grounds are situated in local communities, sometimes literally in the backyard of dwelling houses, whereas many new grounds have been built on available (and cheaper) ground near freeways and wastelands. And I get the feeling that I am walking towards one of those. 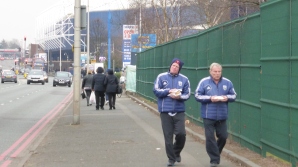 I would have got a very different first impression, if I had gone to the Hawthorns station. The five minutes walk from there takes you past dwelling houses, and you can see the stadium looming large behind them.

The stadium is built in the ‘brick’-tradition. Whereas brand new grounds like the Emirates and the Etihad from the 2000’s are all about huge glass facades, this is a brick fortress with steel on top of it.

Even the big reception annex has very little glass. There is, though, enough to see that visitors arriving at the reception have to walk through an airport like metal scanner, on top of being searched.

The heavy security measures came into place at grounds after the Paris terror attacks – and are somehow a throwback to the eighties where it was quite common to be thoroughly searched when arriving at a ground. In recent years, it has just been in the away section.

I am also searched as I enter the souvenir shop to have a look around.Inside the shop, I see a rarity these days – WBA autographs books. At the top clubs, players hardly stop for autographs, but they do here. 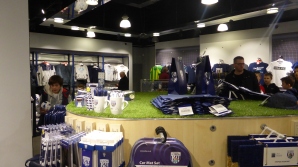 I see a few of the Albion players arrive at the ground. They park in a fenced-in carpark and stop to sign autographs for the 15-20 fans who are waiting. Some fans have taken up their position outside the bars, whereas others stand at the car entrance. The latter ones have the posibility of photoshoots with the players as well. 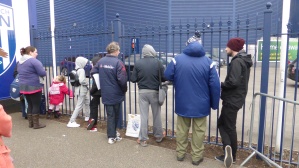 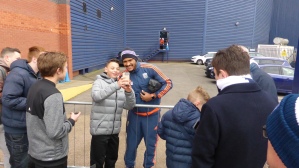 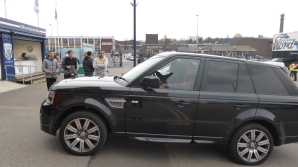 Just like the players’ cars are fenced in, so are the away fans down the opposite end of the ground. Gates either side of the away fans’ entrances are closed 15 minutes before kick-off and kept closed after the game to segregate the fans. 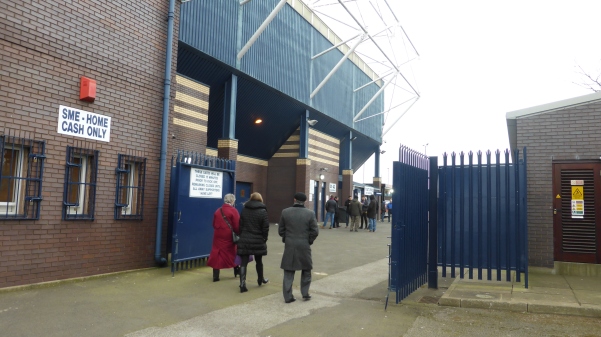 There is also a high degree of security around the fan zone opposite the Halford Lane’s stand. It is fenced in, and I am searched as I enter. The atmosphere is fine, there are plenty of places to get food, playground for children, and interviews on stage. But it is bitterly cold and windy, so I soon move on. 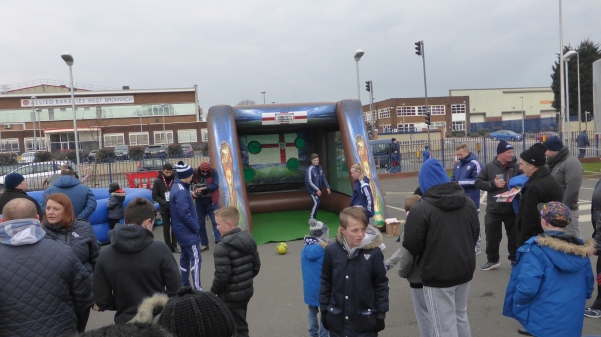 A bit further down the road, I find the club academy. Needless to say that there is guard making sure I don’t tresspas, so I don’t get a look around. But even though the buildings are brand new, the presence of an academy adds to feel of this being a big traditional club.

And there are features outside the ground that points to the tradition. First of all the gates to the forecourt in front of the East Stand feature the name and depictions of Albion goalscoaring legend Jeff Astle.

In front of the reception at the same stand, there is statue of Albion star Tony ‘Bomber’ Brown, the man with most appearances for the Baggies. 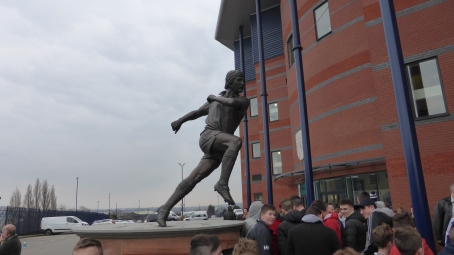 And almost next to the statue, you find the memorial plaque for WBA being a founder member of the league alongside a plaque for Albion player Harold Bache, who lost his life in the Great War.

The outstanding feature of the ground, however, is what is probably the largest memorial garden at any football ground. Here, Albion fans can have their ashes scattered or buried. There are hundreds. Old and young – from 0 years of age to 90. Names and vows of football allegiance to the Albion mix with christian messages. Somehow it seems odd to read the Albion goalscoring chant “boing boing” on a gravestone. There are footballs, boots, scarves, cups, pictures – even beer cans. I will soon publish a post on this phenomenon. 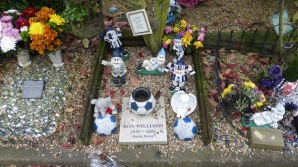 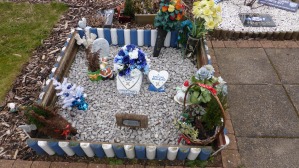 I enter the ground. I am in the West STand from the 1980’s. You can see the that it is not a modern concourse. They have over the past 15 years been dominated by spacious carpark architecture. Before that, concourses tried to be more assembly house-like. And this is also the case here. Particular the floor is something, you wouldn’t find in a more modern ground. 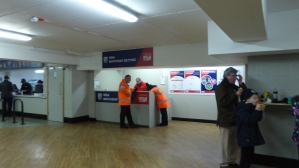 Being in Brummie-country, I try to blend in with a Balti pie, while I watch the football scores flashing in on the screens. It is a late kick-off, so all the other matches are about to finish.

In the stand, I notice another couple of historic features. In one corner, there is big thistle, that is claimed to be the only remaining feature of the old stand. And on the screen in the opposite corner, we are regularly reminded of how Brendan Batson, Lawrie Cunningham and Cyril Regis made one of the most astonishing breakthroughs in the long battle against racism in football. Not that it is reflected in todays crowd. I do my usual count of 100 random supporters passing by me. 80% men, 98% ethnic white, even though Birmingham is a multicultural city.

I really like the ground. It is not a modern amphitheatre but four separate stands, but the corners have been filled out. In this way, it still looks like an English ground rather than new anonymous global type, and yet makes a great soundscape. Although there are only 26.000 people. there is a lot of noise and atmosphere. 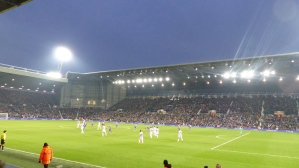 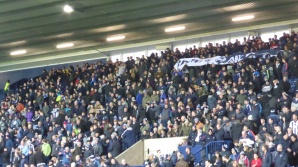 West Bromwich take an early lead, and within 30 minutes they are three up, playing some lovely football. The Palace support, which is famous for being vocal, seems shellshocked, whereas the Baggies are rocking. Just after the third goal, police moves into the middle of their section, as somebody apparently has been overdoing the celebrations. 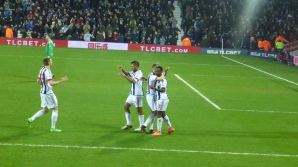 Although there were only 20% women in the ground, I am surrounded by women on all sides of my seat. The one to my left do not take any interest whatsoever in the match. She seems to make a point of looking in the opposite direction of the action. She is obvioiously there to help out an old relative on crutches. He celebrates all of Albion’s goals by swinging his crutch enthusiastically. “Boing boing” – and a few “Going down” songs about Aston Villa. 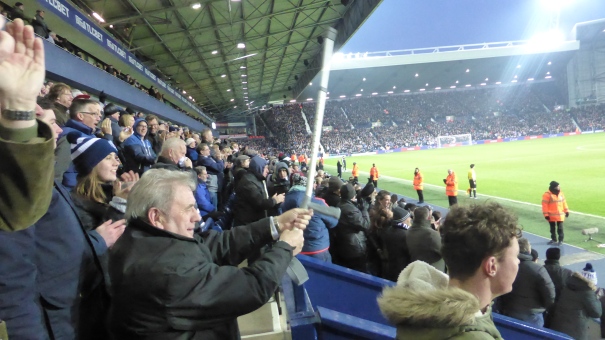 Although Albion is playing some brillant stuff, the guys behind me are of the negative type of fans. Complaining about all the things that go wrong (whereas the Birmingham City fans, I was sitting amongst a few days before were quite good-humoured despite a poor display). The negative Baggies fans have a point in the second half. An unbelievalbe mix-up between central defender Olsson and keeper Foster lets in Palace. And suddenly it is game on again. Palace cause panic in the Albion defence and pull another goal back with 10 minutes to go. Wild celebrations among the Palace fans, as some of them rush to the fence separating them from the Albion fans. The police move in.

Tension grows. A ball boy knocks the ball away rather than giving it to Palace winger Zaha for corner. As  Zaha picks up the ball, he gives the ballboy a telling-off, sparking furious outbursts of tension from the Albion fans. There is though, no more drama. Albion win 3-2

As I wait for the train on the Hawthorns station after the match, an Albion and Palace fan agree that the police was overzealous and reacted to goodhumoured celebration. As we board the train, a large of very drunk Palace fans also enter. Very loud, good humoured – but banging the ceiling of the train so hard to their songs that the ceiling above the door of the train carriage is broken. Fortunately, the train moves on – and back at Birmingham Moor Gate I get off and out in the silent Birmingham night. 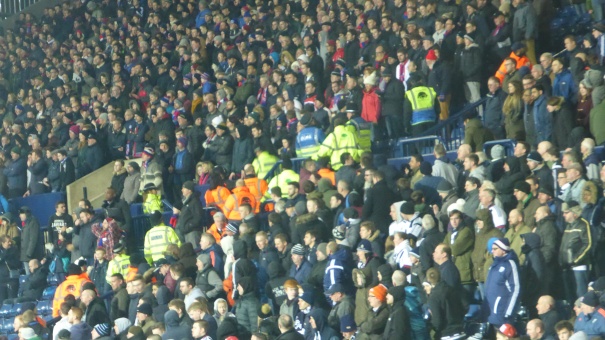 Great match, great atmosphere, great experience. I just wonder if the atmosphere is anything like this in a boring scoreless draw.