Home › Football grounds › From “Pie and Pint” to “Palm trees and Paella” at Priestfield, Gillingham

From “Pie and Pint” to “Palm trees and Paella” at Priestfield, Gillingham

I must admit that I didn’t really have any great expectations, when I made the  trip to Kent’s only football league club, Gillingham. But being in London on work, I found out that there were two matches on this Tuesday night, and as I had been to Luton, I decided to take a trip into the unknown. It turned out to be quite a gem – in so many ways. 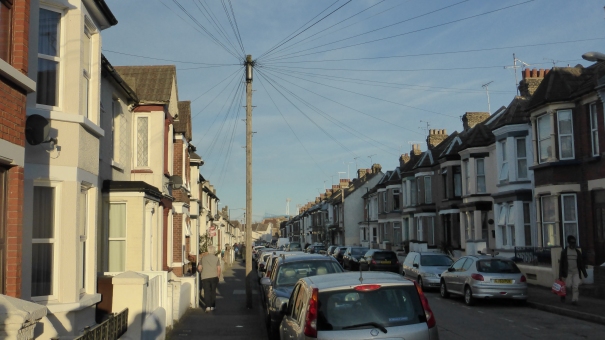 I had never been to Kent before, but the area seemed beautiful – both countryside and towns. And Gillingham’s football ground, Priestfield, is located right in the middle of a network of small streets lined by terraced houses. With residents parking outside their houses, there is probably little chance for football fans to find a parking slot near the ground. And that gives a special atmosphere. There is hardly any traffic, despite only 45 minutes till kick-off. Just people walking in the street. 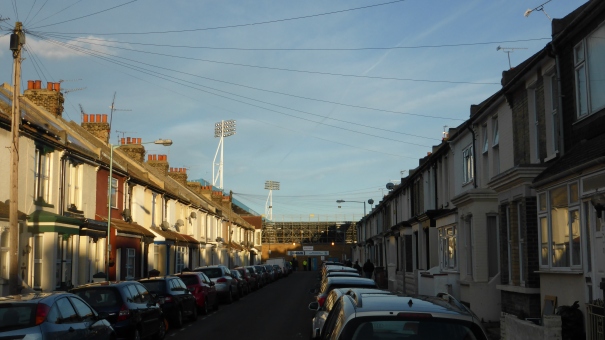 It is nice and quiet – and I almost feel like I am in Lowry’s fantastic “Going to the match painting”. Surreal. And nice. 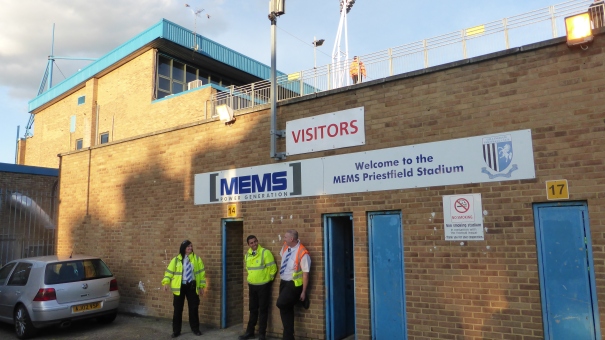 Priestfield Road leads to and end at the visitors’ stand, or “Brian Moore Stand”. Two small passages lead to the streets running parallel with Priestfield Road, from where home supporters can enter the ground. But after the match, the gates for these passages are locked, to secure the visiting fans a safe exit from the ground. 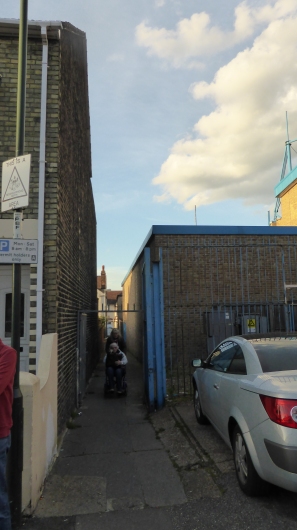 The Brian Moore Stand is, rather unusually, a temporary stand of the kind that you can hire for a few days for an event – and quickly dismantle again. There have been plans to build a proper stand, but then again, there have also been plans to abandon Priestfield all together, because there is not much room for expansion and no parking facilities in the narrow streets. 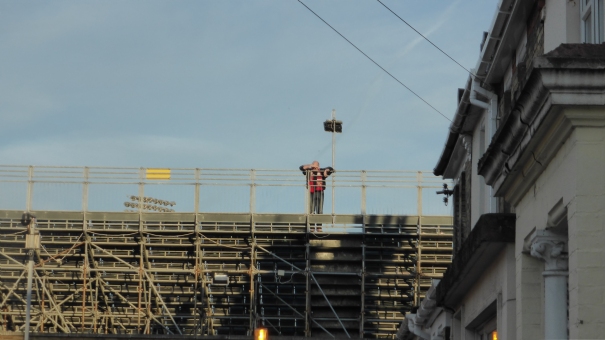 We walk down the passage to the left of the visitors’ end, enter Redfern Avenue and get to the Medway stand, the main stand. Here we find the ticket office as well as the souvenir shop. 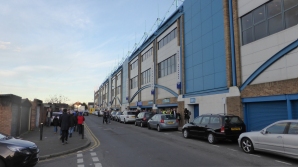 The fact that it is the back gardens of the terraced houses that line the street, makes it seem less narrow and intimate. But still, there is no traffic, just the mumbling sound of fans walking and talking.

We ask for tickets for the most vocal part of the ground. And we are put in the Rainham End. We have to enter it through the main stand in Redfern Avenue, but there is still time to go round the ground and have a look at it. What an amazing sight!

Palm trees mark the entrance for a small VIP carpark and the entrance for brand new conference facilities and bar at the corner of the ground. A giant sun tent (or umbrella) shields visitors entering the facilities. I have never seen anything like it at a football ground. “Decay and Dubai”, James puts it. And it really it is remarkable clash of styles. You suspect that the club tries to lure wealthy Arabic oil billionaires to invest in the club. 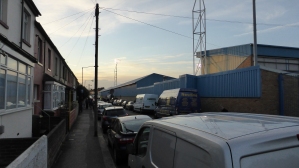 To make the contrast even starker, the Gordon Road Stand is a thoroughly traditional English stand, looking very basic and unwelcoming. And yet, it is not that old. Here, until 1989, you could find the oldest stand in England – dating from 1893. It was closed in the aftermath of the Bradford fire, and finally demolished in 1989. But the new Gordon Road stand, does not really reflect the modernization that swept across English grounds from the 1990’s onwards.

We return to Redfern Avenue to enter the ground. The turnstyles are good, oldfashioned, narrow ones. I often wonder how men bigger than me – or pregnant women – are supposed to enter through them. But then, there are probably not many pregnant women wanting to go to matches. I make my usual count of gender ratio of 100 people passing me inside the ground. 86% male, 14% female. And in terms of etnicity, the 100 counted are all white.

Put in another way – in terms of gender and etnicity, Gillingham is pretty much like most other football league clubs, except the Manchester Uniteds and Arsenals. Or, just outside the league, FC United of Manchester. 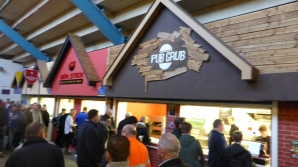 And this crowd composition makes the concourse and its stalls the next amazing thing about Priestfield. Normally, you can buy a pie and a pint, maybe a burger or a hot dog. But here, there are also crusty sandwiches, italian food, wok meals and paella to chose from. “A very multicultural choice for men in hoods”, as James put it. Anyway, that is another first for me. My first paella inside an English football ground – but I do also grab a pie to get into the mood for the match.

Quite a few fans enter the stand from a bar, located in the Dubai-like conference rooms next to it. There is loud music and party atmosphere. And a lot of the fans are really tanked up for the match.

One of them dances in front of us, as the match kicks off. Later, during half time, I meet him down in the multicultural concourse. “Somebody has stolen my wallet” he shouts. I spot a credit card by his feet and ask him, if it is his. He picks it up with some difficulty and yells: “That is my credit card” – and heads for the beer sale.

Whereas that was all good-humoured, another drunkard is unpleasantry aggressive. For some reason, he turns his anger at a peaceful looking family sitting behind him. He shouts and threatens, and stewards are called in to lead him away. He tries to wrestle himself free, highly agitated, while a few fans sned him off with a “cheerio, cheerio, cheerio”.

Down the other end, the 204 travelling Wallsall supporters are put at the top of the temporary stand. Although it is becoming more and more unusual to see a stand without roof, it does not look entirely out of place seen in the twilight at a distance.

The new Gordon Road Stand looks very traditional, the only standout feature being the rather peculiar looking television platform with scoreboard. Apparently, only the fans in the Medway stand opposite it are intended to keep track of playing time and scoreline.

From the corner of the Gordon Road and Brian Moore stands, police keep a track of events. They are partly hidden by the traditional floodlight pylon – which is becoming a rare sight, as more and more ground attach the floodlight to the roofing of the ever bigger stands. 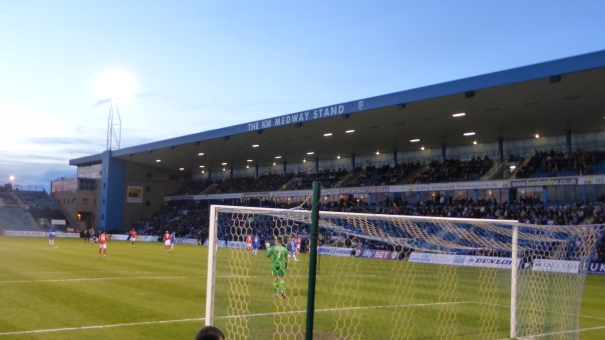 In the Medway Stand, there is a row of 20 executive boxes in the middle. Gillingham seems to be quiet well equipped with them and other corporate facilities. In fact, they hand out commercial brochures in the club shop, advertising all possible deals from the boxes (which are £7.500 to £12.000 a season + VAT) down to birthday parties and “Player Fan Sponsorships” which are £75.

Gillingham not only try to attract business attention. The local MP has a column in the matchday programme, which I haven’t seen before. Conservative Rehman Chistis writes on “Getting the facts on the EU referendum”. Not what you expect in a football programme. He is a true politician “We each have to decide and I have an oen mind on how I am going to vote”. Fantastic. He goes on to write about the figures used in the debate by the yes and no campaigns. “The truth is likely to lie somewhere in the middle, no one seems to know what it is.” Amazing. He ends his notes with a PS: “Who holds the record for the most league goals scored for Gillingham?” I wonder how many votes he scores on that account.

The Rainham End where we are sitting is quite packed. There is a little chanting, but not that much. The crowd does get excited, when Gillingham are awarded a penalty there in the first half.

Fans rush to the pitch side to be as close as possible and are ready to celebrate. I can’t see it, but I can hear the Wallsall keeper blocking the shot. He had already had two good saves, but after this, Gillingham loose their way a bit. 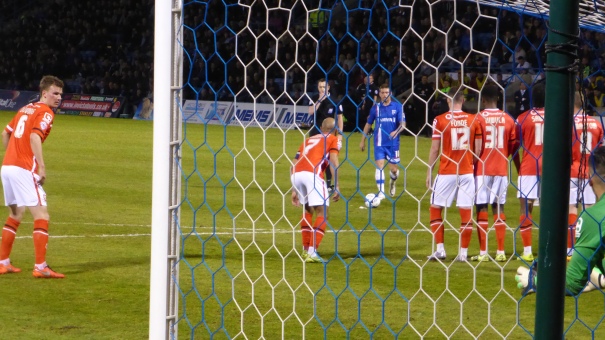 In the second half, Wallsall see more and more of the ball, and after taking the lead, play some nice football on the break. They go two up – and really, it should have been more.

A Gillingham player crashes into the advertising board down the Brian Moore Stand. Rather symbolically it is sponsored by “The co-operative funeralcare”. 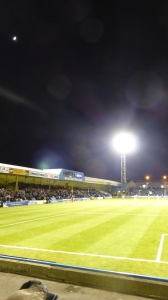 Deep into injury time, Gillingham manage to get a goal back, but it is no more than a consolation goal. Wallsall win 2-1 and move firmly into the driving seat in the race for the promotion play-offs.

We leave the ground and go down the Gordon Road. There are a couple of cars trying to make their way through the crowd. But once again, it is almost exclusively the sound of voices and footsteps you hear in the warm, dark night. A little magic at a lovely small ground.

Politicians, paella, palmtrees. Mixed with the traditional pies and pints. Narrow streets and community feeling. I hadn’t expected any of it. So maybe that is why I find it quite special. I really do hope that Gillingham will remain at Priestfield for a long long time.