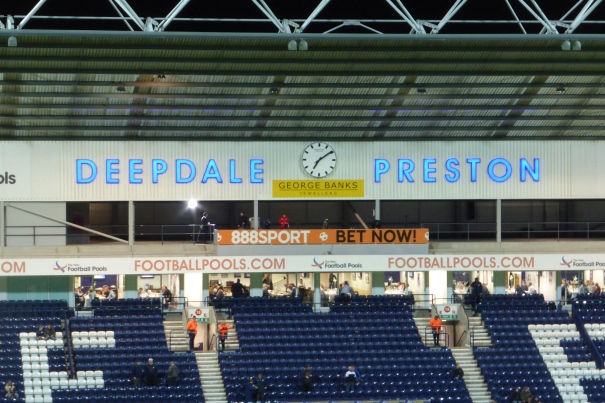 Deepdale. The name has a romantic ring to it. Somehow reminiscent of Rivendell from Lord of the Rings. Home of Preston North End since 1875 (although admittedly the first years as a cricket and after that a rugby club), the venue with the longest continued history of football playing in the world. 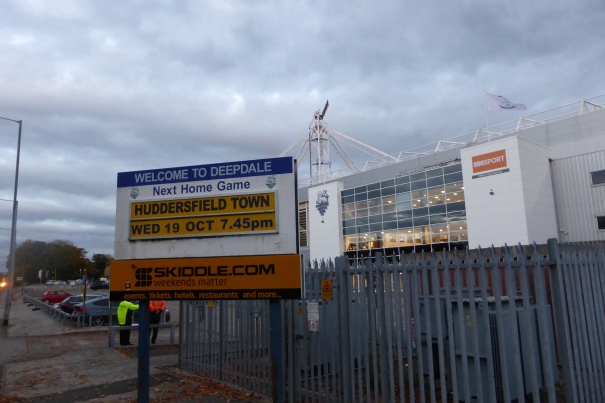 Preston North End. A club name with a similar romantic ring. One of the founding clubs of the football league, they not only won the first ever league title in 1889; they were unbeaten and took the cup as well, becoming the first club to the prestigous league and cup double. “The Invincibles” they were called.

Alas, you have to know this in advance, because there is hardly any material evidence at the ground that indicates that this is, in fact, a football historical site. In two steps, Deepdale was completely renovated from 1995 to 2007 – and Preston North End has not been playing in the top tier of English football since the early 1950’s.

Almost as a sobering wake-up call, the first road sign with directions to the ground on the way from the train station is located opposite the prison of the city. Forget about romance and Rivendell. Whereas the sign is next to a prison, the stadium itself is located next to the headquarters of the fourth battailon of the Duke of Lancaster’s Regiment. 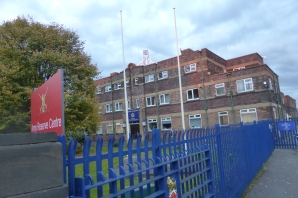 I have seen plenty of photo’s and even video of the old ground ( https://www.youtube.com/watch?v=zf__ewg_d9U ) complete with pillars, wooden terracing and wooden paneled corridors  etc. A classic old football ground.

The new ground – well, it is .. modern. Lots of coated steel, concrete and glass. Only the club crest with the lamb holding the cross indicate that this is a place of some sort of history (the lamb of Saint Wilfrith, the patron of the city). 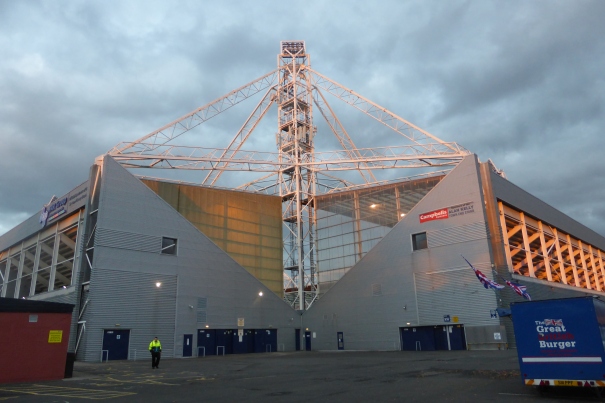 Whereas most old grounds have developped organically with the surroundings and new demands with additions, rebuildings etc., sometimes following the curve of the neighbouring street rather than a strict architectural plan, these modern stadiums look like they have been dumped by the machine that made them regardless of the surroundings.

In state-of-the-art stadiums built today, the players’ entrances are made to match modern football stars’ expensive cars. Not so here, though. The entrances in the Alan Kelly Town End stand are very modest and easily overlooked.

Turning to the Invincibles stand, the South Executive area with the players’ lounge looks pretty similar to the neighbouring Minerva Health Centre. 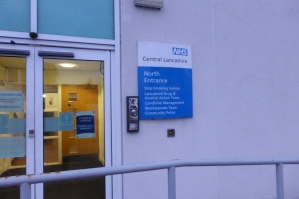 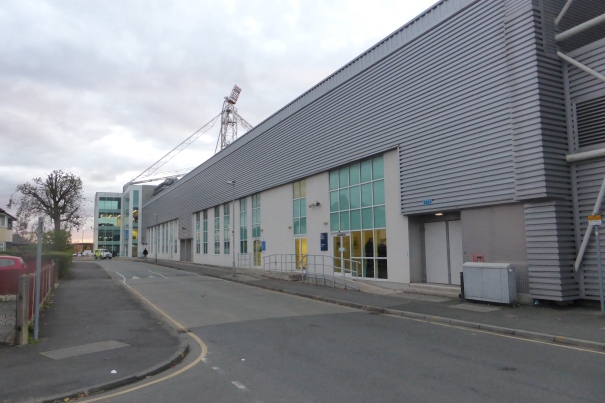 And a little further down, you may mistake the North Executive Entrance for the North Entrance to the NHS Stop Smoking Service and Lancashire Drug and Alcohol Team. In a way, it is a nice touch that a football club engages with the local community and take on social responsibility. But it is somehow deflating the excitement of walking around a football ground.

The third stand is named after former Preston player Bill Shankly, who also has had the street along the stand named after him. This is where the away fans are located. 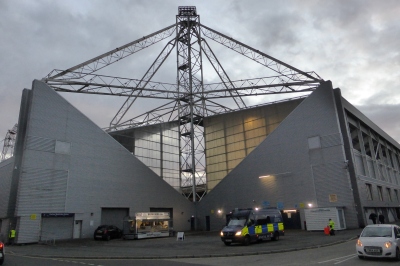 You could make a spot-the-difference competetion with photos of the three corners of the ground, probably to the delight of the architects. To me, it seems rather barren. Especially as it is so dominated by coded steel. The food van in front of the away end seems rather out of place.

But once you walk along the stands, you do find distinguishing features. The players’ entrance in the Alan Kelly stand, the Minerva centre and executive entrances in the Invincibles stand, and the Lifestylefitness centre here in the Bill Shankly stand. Still, to me, it detracts from the magic of a football ground to have these other functions added.

Another ‘strange’ element is the Heartbeat cardiac rehab centre, also in the Bill Shankly Kop. Although this part of the ground was actually built to host the National Football Museum. Not attracting enough visitors, the museum decided to move to Manchester back in 2010. It says a lot about the magic of Deepdale and Preston North End, that the stadium was the natural choice to locate a national English football museum. But – mainly football fans would dream of visiting a football museum. And it turned out that football fans were not prepared to travel to Preston just for the sake of a museum. Manchester, on the other hand, attracts thousands of footballing tourists every week – the Manchester United museum having between 200.000 and 300.000 visitors a year, albeit with the lure a tour behind the scenes of the stadium. This placeness in a ground, the national football museum chose to give up – but are probably doing better than they would ever have managed in Preston. 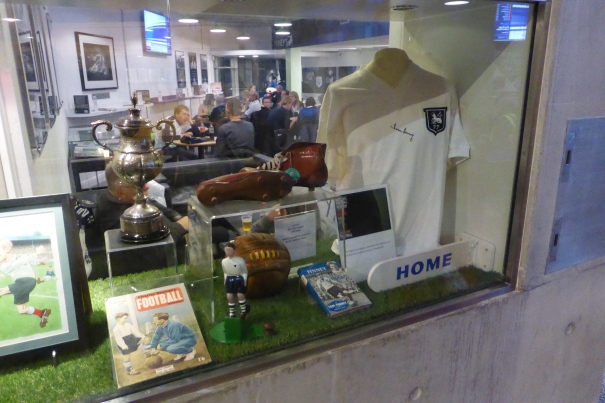 There are a few remnants of the football museum. There is a built-in display case just inside the entrance to Heartbeat, where the club coffee shop named after Preston North End Star Tom Finney. Here, some of the National Football Museum’s Tom Finney objects are still exhibited. I have read, that Tom Finney was so upset with the Football Museum leaving the ground, that he wanted them back.

I visit the ground with my son Thomas. And we opt for a prematch meal in Finney’s. It is not exactly crowded, despite being matchday, maybe because kick-off is just over 1½ hour away. But still. The food is okay. With burgers being the only traditional football food on sale, I choose a rather unconventional lasagne, leaving the burger tasting to Thomas.

Visiting the toilets, we pass a wall of lockers – another remnant of the museum days.

Outside Heartbeat and “Finney’s” we find probably the most distinguishing feature of the ground. A statue of Tom Finney by Peter Hodgkinson based on sports photo of the year from 1956, called “The Splash”. A sliding tackle on a water-logged pitch by Tom Finney, with the water splashing around him. 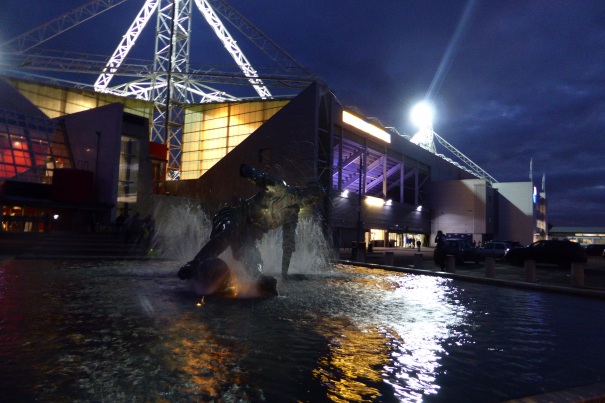 It looks even more spectacular as darkness descends, being lit up from the water. The same, in fact applies to the stadium.The magic of the floodlights conceal the barreness of the coded steel. Maybe, if we had been late arrivers in the darkness, we would have found Deepdale just as mysterious and magical as the name suggests it to be.

Even the concrete of the Tom Finney stand glows a strange kind of purple. 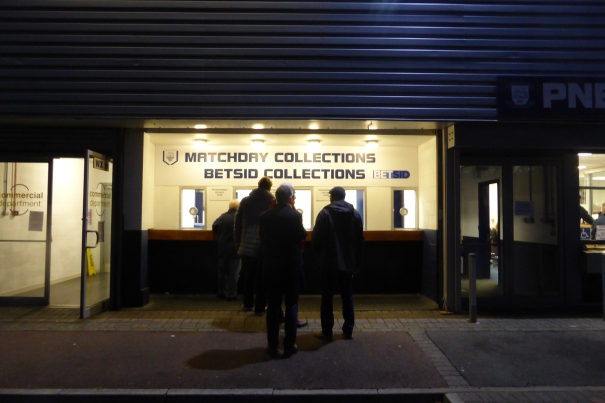 We pick up our tickets at the collection point. Standing in behind three other Danes. Well, there probably isn’t an English match played without Scandinavians in attendance. 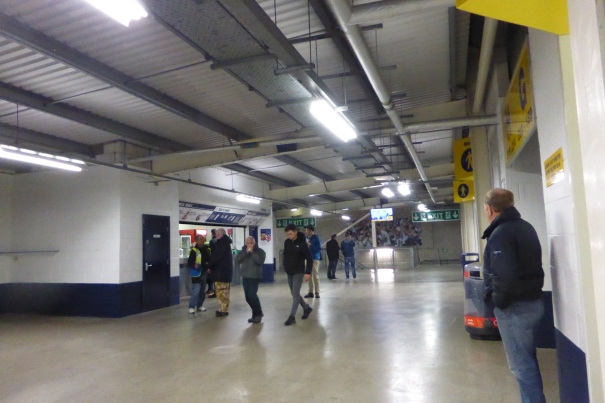 We are in the Tom Finney stand. The concourse is rather barren. It is spacious – and more spacious than the one we visited the previous day in Bradford. But it is more barren than other modern ones such as King Powers, the Etihad or St. Andrews. 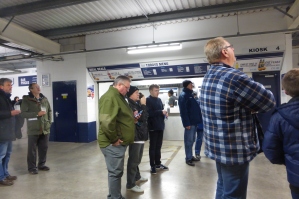 The taste of a ground is an important part of the experience. I go for the potato and butter Pie, which is pretty good. Thomas has the steak and potato version, and rates the steak in it of a poorer quality than the one we had at Bradford the previous night. 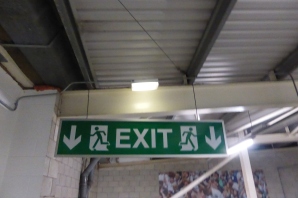 One little detail I haven’t really noticed in other grounds is the special “EXIT” sign for early leavers. Maybe because leaving early is so rare here, that they only bother to open one of the exitgates early. 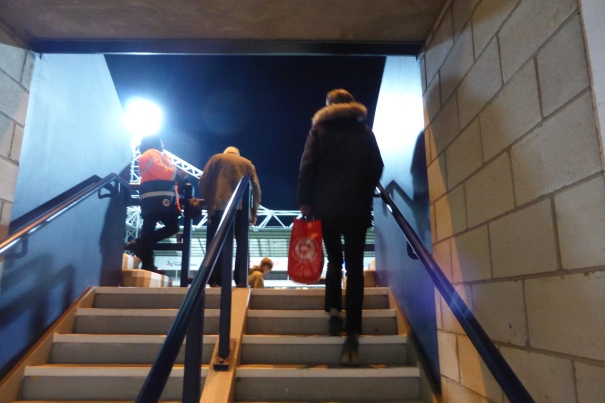 We enter the stand – and are again captivated by the floodlights. It is really great to see a modern ground with floodlights pylons rather than lamps on top of the roofing. 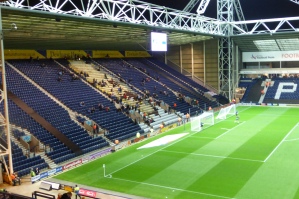 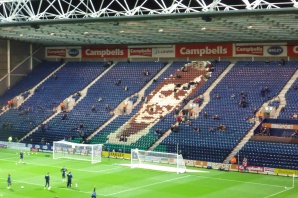 Another nice feature of the ground is the fact that the Bill Shankly, Alan Kelly and Tom Finney stands have portraits of the persons the stands have been named after as seat decoration, rather than the more usual sponsor trademarks.

And the Invicibles Pavillion opposite us has a huge distinguishing TV-camera gallery above the executive boxes. Well, it was probably intended for something else – or maybe it is the architect’s reference to the pillars of the old pavillion the stand replaced.

Preston North End play Huddersfield tonight. It is the second time, I have seen Huddersfield away, and the second time they have brought a strong, vocal away support. They start competing with the music over the tannoy long before kick-off – and they keep on singing despite going a goal down within 6 minutes of kick-off.

The goal sparks cheering and some singing from the Preston North End fans. As usual, I deduct crowd ratio of gender and etnicity from counting 100 people around me. I am a bit surprised, and make a second count down the concourse during half-time. With a rather similar result. 100% white both times, and 91 and 93% male respectively. It is not the first time I have come across a count of 100% white, but then I usually spot someone of another etnicity in another part of the ground. Not here. And although women rarely make up 20% of crowds, they normally make up more than 10%. 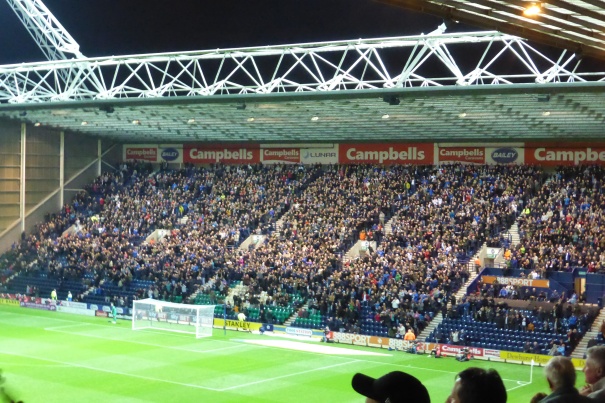 It is not a tough, aggressive crowd, as you find in most other grounds with such an overwhelmingly white male audience. It is no coincidence, that the Preston North End supporters are called “the Gentry” and each year pick an away match as “gentry day” where they dress up with bowler hats and suits to honour and remember fans and players, who have passed away. 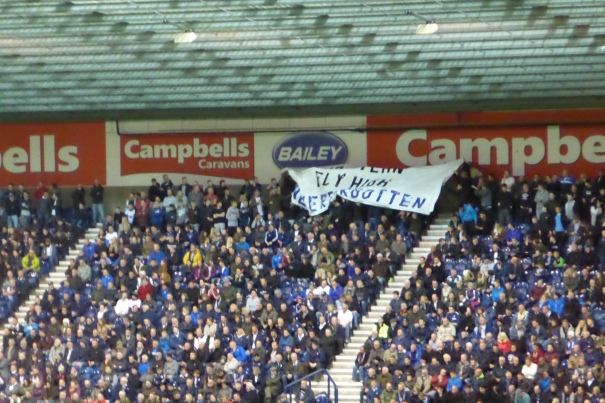 This remembrance tradition also comes out in the sixteenth minute, where everybody gets up for a minutes applauding in honour of a 16-year-old Preston North End fan who was killed in an accident recently – and a banner is passed along the Alan Kelly end proclaiming that he never will be forgotten.

And among the birthday greetings that filter over the electronic screen, there is also at least one remembrance for a passed away Preston fan. The stands may be new – but such things really prove the strong identity and sense of history that surrounds the club.

The match is really good. Huddersfield just off the top of the table are at sixes and sevens whenever Preston deliver into the box from setpieces – and Preston are deservedly two goals up at halftime. Still, the Huddersfield supporters keep singing, and they still keep it up for a couple of minutes after going three down from another setpiece early in the second half. But, then, gradually, they give up. A lot of them leave 15 minutes before the end, preferring to catch an earlier train, as things clearly not are going their way. It is quite common to have a go at early leavers. But train connections on midweek nights really are horrible – sometimes there just is no train to take you back if you stay to the very end of the match.

I leave the ground in a good mood. The floodlights have wiped out the barreness of the steel and concrete. The entertainment of the match has generated plenty of excitement. And the remembrance of passed away fans mix with impression of Tom Finney’s splash. And who knows, maybe in 50 or 60 years the stadium will have had to adapt to the surroundings or new demands of the game to give it a more generic feel.