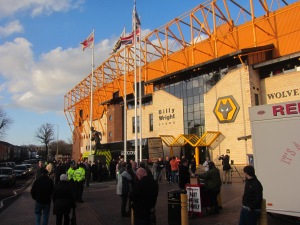 Talking about football, my landlady, Bernadette, tells her favourite story about George Best. He is in a hotel room with Miss World, and calls for room service. Room service opens the door and sees George and the gorgeous girl lying on the bed, money strewn around them, champagne bottles as well. “Where did it all go wrong, mr. Best” he is supposed to have said.

I ask the same question to two Wolverhampton Wanderers under the brand new Stan Cullis Stand at Wolverhamptons famous Molineux Ground. From being in the Premier League last season, Wolves now find them self second from bottom in the Championship, in risk of becoming the first team ever to go directly from the top to the third division – twice! 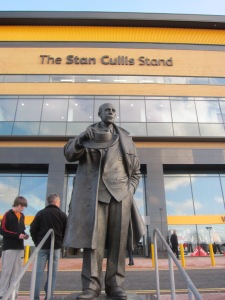 They have been asking themselves the same question, and they point to the new stand as a possible place to start. “They wanted to move the stand closer to the pitch to frighten visiting teams. But what happened was that  our players suddenly could hear fans slamming them, and confidence disappeared”.

To add insult to injury, the roofing hadn’t been completed last season, so my two new friends had been sitting in an uncovered stand, getting soaky wet whenever it rained, and there had been floodings under the stand. Now they had completed the roofing, but still the stand was so badly designed, that the wind swirled around and made it a cold experience. Not to mention the money invested in the stand. 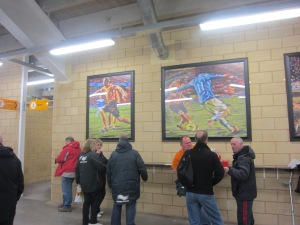 Actually, the stand had made a positive impression on me at first sight. Even though I would have loved to seen the old Molineux with its characteristic 7 vaults, I like the look of the new ground from the outside. Kept in shades of yellow and dark with plenty of Wolves heads to show, that this is not the same random new glass and steel construction that you find in so many new stadiums.

There is a friendly air to the new stand. The signs don’t threaten you with arrests for taking alcohol into the stands, they just ask you not to do it. There is a changing room for babies. There are paintings on the wall. You can even buy jacket potatoes in stead of pies, sausage rolls and burgers in the café. Or so I think. Because when I ask for one, I am told that “we only have pies”. A sign of the hard times that have befallen Wolves? Just like the shop, where so many things are on sale – except the impressive Wolves’ heads. 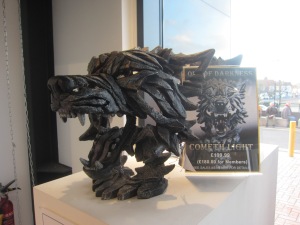 Another fan focus on the players. In all honesty, he says, Wolves only had two players of premiership quality. The reason why they managed to stay up in the first season was that they worked so much harder than everybody else. Once they couldn’t do that, they were exposed and dropped down to their real level.  And then their timing is sacking managers has been awful. Norwegian Staale Solbakken created quite a culture shock when he brought in a lot of foreign coaches. Perhaps he shouldn’t have done that, but he should have been given more time. Now he was sacked after 3 bad results, and a new manager was brought in right in the middle of the transfer market. By the time he had assessed the squad, the transfer market was over. Anyway, he cannot bring anything new; they should have stuck with Solbakken  – or McCarthy in the first place. My first two friends agree that the timing has been wrong, Only they think that McCarthy should have been sacked sooner rather than later.

In the second half, Wolves pounce on a defensive slip and score. And for the rest of the match they fight like – well, tigers, and mange to hold Hull at bay. As the clock ticks down the atmosphere gets really intense, even the Stan Cullis stand joins into bits of singing, before finally celebrating a hard-earned victory that lifts them out of the relegation three, at least temporarily.

However well it looks from the outside, it is, however, difficult to generate an intense atmosphere at Molineux. The stands are too separate, the gaping holes in the quadrants allowing atmosphere to fizzle out. It doesn’t help that less than 20.000 turn up, leaving even more gaping spaces on the terraces.  There is however a strong feeling of family – and sense of history, with an impressive marketing of the club museum on the screens underneath the stand as well as outside the ground. The pre-match TV was all about the museum with curator Sophie Cawthorne featuring. 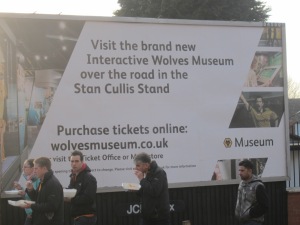 It is not quite the Wolves of Derek Dougan and Kenny Hibbit, but still enough to make you hope that they avoid the drop and get back on track.