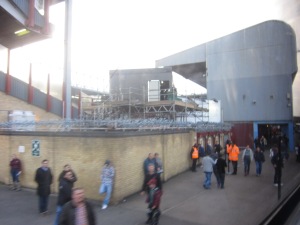 On the road with Manchester United support again, this time to West Ham United’s Boleyn Ground in West London. After 5 ½ hours on the road, we arrive at the ground just outside the entrance of the away section. As I had been to see the ground in May and seen the facade and memorial garden, I don’t really feel like venturing into the home fans’ territory, so after buying a programme, I go straight to the entrance.

To my surprise, I am not even searched by security and police as I enter the away end. On the contrary, I am welcomed by stewards. And inside the tiny room beneath the stand, Manchester United supporters are welcomed by signs in the refreshment sale (which doesn’t serve beer, however). The United support for this match does not seem as “hardcore” as the one that turned up at Stoke. It is much more mixed, particularly etnically and genderwise. I also hear a couple of Danish and Spanish voices and see the usual Asian suspects.

As the United section was sold out, there must have been some ticket touts, who did’t manage to sell their stock. There were at least 20 empty seats around me right in the corner of the ground. Or maybe some fans had decided that they would have a better view from the middle of the stand. As nobody in the United section is actually sitting, it is not impossible to squeeze into a part of the ground with a better view. Or maybe some people have chosen to avoid their seats, as we have about 20 policemen right in front of us carefully monitoring our every move, filling notebook sheet after sheet with observations. 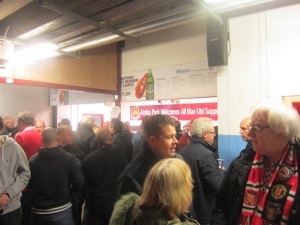 Manchester United have always enjoyed great support in London; but the theme hits something important. On the coach, supporters were singing “We are not cockney reds, we are born and bred in Manchester”. With United attracting so many tourists, it is important to underline your local roots. And the depth of your loyalty. Just like at Stoke, several United songs proclaim that United are greater than England, that United have won more World Cups – and that “You can stick your f….. England up yours”.
The girl I met on the coach to Stoke had told me that she was to go to Portugal with her job for 7 months. The only good thing in England, was watching United – apart from that she couldn’t wait till she got away. When I remarked that I could imagine that she didn’t support the England side, she answered scornfully: “No proper United fan does”. Perhaps partly because of the taunts for not being as local (or provincial) as other clubs, Mancunian’ism is central to many United supporters.

The watching policemen seem rather overzealous to me. Several United supporters are pounced on, despite seemingly only taking part in the banter on an equal footing with the West Ham fans.

The match is not the best technical game, but because of a strong physical approach from West Ham, several lapses from both sides, there is a lot of end-to-end stuff with chances at both ends. West Ham take the lead after about 15 minutes, followed shortly after by a United equalizer. The pattern is repeated in the second half, this time United equalizing 15 minutes from full time. 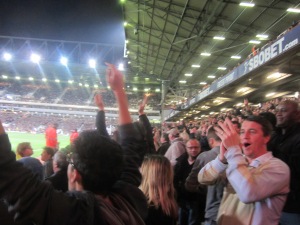 The match is a fine display of the excitement of English football. The United crew is not quite as vocal as the one Sunday, but they still do their bit to create a great atmosphere. So too do the West Ham supporters. They did a “I am forever blowing bubbles” on their own, before singing along to the tape over the PA before the match. They did so again at half time – and at the end of the match. To me, a lot more impressive than “You’ll never walk alone” at Anfield, this time accompanied by bubbles from the side of the pitch rather than scarf raising.

Altough there is a half-open cornequadrant, the ground seems very intimate and integrated, the floodlights adding to this feeling. The view from the seats, however, was very poor. Even more so for the poor Manchester girl behind me, who tried to get a view standing on her seat, but was asked to step down by stewards. But all in all definetely a good place to visit. 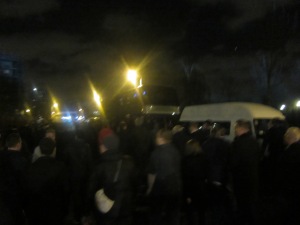