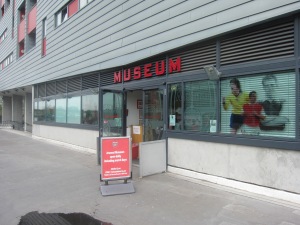 “It is interactive” I am assured as I purchase my ticket for the Arsenal Museum. The museum is located in the basement of a building next to the Emirates, and the entrance is not very impressive. The staircase downstairs is promising, however. Here you find old advertising boards, signs, crests from the old stadium Highbury. It gives the impression of a strong historical awareness.

The exhibition downstairs is divided in two “halfs”. The first half “serves to honour those who have made Arsenal the institution it is”, the second half focuses on the “landmarks” that shaped Arsenal’s reputation, that is matches and moments of victory. 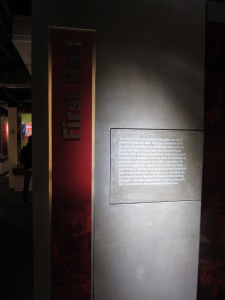 So this is not a museum that intends to describe the ups and downs of a football club, to assess critically the good and the bad. It serves to honour heroes and celebrate moments of victory. Failures and defeats do not have their place here. You can say that most club museums do that – focus on victories and great moments. And, for instance, the Chelsea museum is very boastful in many of it’s claims. But I have not seen any other football museum as onesided as this. In fact, what makes the Wolverhampton museum one of my favourites is that it is highlighting the lows as well as well as the highs, in this way giving a true representation of what football is all about. Because highs do not become highs, unless they occur after a low. And the Arsenal museum seems to give the impression that life as an Arsenal fan is one continuos high.

“Ever since its formation as an amateur club, Arsenal has built a reputation for assured judgement, dignity and consistently high performance” claims the welcoming text. Or “It was with the same pioneering spirit of the men who developed Highbury, that the Club, nearly a century on in 2006, took the short but bold journey to the Emirates Stadium, a modern home steeped in the values and spirit of the Club where Arsenal can continue to progress”. “All that is intended here is to pay tribute to the type of men who have made the club what it is”. And you can find many similar statements in the texts. “The Arsenal legend has endured since the 1930’s – resting on preparation, organisation, integrity, dignity, teamwork and a reputation for first class football. Through visionary managers, intelligent players and a style of play, that has often fused doggedness and explosive fluidity, the Club has continually re-written the record books and changed the face of football.”

I wonder what Arsenal fans think of this. Do they only remember heroes and victories? Do they also perceive life as an Arsenal fan as a continous high? Or are they so frustrated with the recent lack of trophies that they want nothing but dwelling on past success, when they visit their museum?

Or perhaps the hard-core Arsenal supporters are not the target group. Most of the other visitors when I was there, were foreign tourists. Are they, perhaps, trying to convince them that becoming an Arsenal fan will be a continuos celebration?

The first half focuses very much on the players, although there are also sections on the workers of the Woolwich Arsenal, Highbury, Arsenal fans, managers – and the club kit and crest. There are some interesting points in the final session. But the bulk of the shirts are spread around the museum in showcases about players and matches – quite a few of them folded, so they do not take up to much space. Which is a shame.

For instance, Pat Jenning’s shirt from the 1980 Cup Winners Cup Final is folded, so you can only see the embroidered crest. You cannot get an impression of how big it is. Whether the elbows were padded. See the (lack of) Sponsors’ logos. You can hardly see it is a shirt. But that doesn’t seem to be important. The same with Charlie George’s shirt from the legendary 1971 FA Cup Final. It is squeezed into a tiny showcase along with other Charlie George objects – whereas four times as much space has been allocated to the slightly ridiculous statue of Charlie George on his back celebrating the goal. 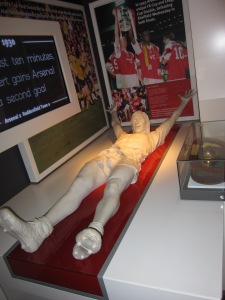 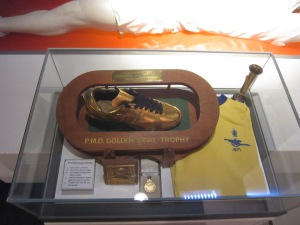 It is a pity, because there are so many interesting stories about the Arsenal shirt that could have been told, actually using displayed shirts. Where you could look and compare. As it is, with one exception, the shirts are only displayed as relics of players, the exception being a shirt from 1934/35, the first season when the red shirt had white sleeves.  Still, the story about the shirt is not really developed around the showcase, although you can find a little more about on an adjacent touch screen. It must have been these touch screens that made the ticket seller advertise the exhibiton as “inter-active”. But there is no real interaction – only choices of pages on screens. And compared to other museums, the touch screens are not really cuttingedge technology. 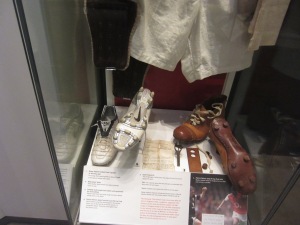 To be fair, there are several interesting objects on display, apart from the 1934/5 shirt. For instance, there is a lot of good archival stuff,  with Archibald Leach’s stadium plan, player contracts, letters to parents of youth players, photos, rule books, an old song sheet, match tariff boards among them. Particularly the section around the stadium and the fans has some interesting stuff, again mainly archival, but there is also an old fans’ rattle, and a couple of horse shoes excavated from under the North Bank of Highbury. Legend has it that a horse and cart fell into a hole during the constructon in 1913 – and the text plays on the possibility that the find could be connected, although it would seem strange that there should be no other remains than two horseshoes. Anyway, a good story that makes you look at the objects and form your own opnion. 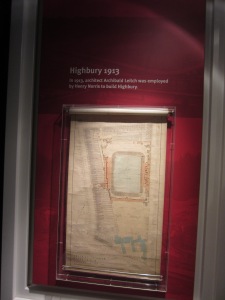 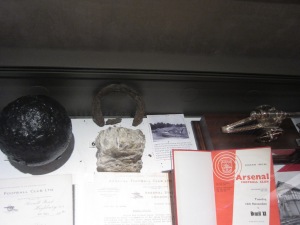 It is, however, a bit worrying to see the condition of a letter from Herbert Chapman to Jcok Rutherford’s family from 1925. It has faded so much, that only the signature is clearly visible. Being displayed in very bright light won’t do it any good. 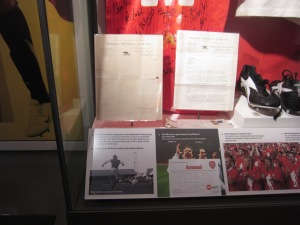 There are also fine objects such as Herbert Chapman’s hat and chair, the phone in the Directors’ box from which George Graham instructed the bench and the centre-spot from Highbury. Several players seem to have donated small collections of items, such as Charlie George. But they are not really used for telling stories except the glorious ones about wins and heroes. 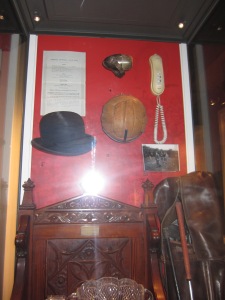 In general, the Arsenal museum has so much focused on an overarching story of glory, that there is hardly any room for the little interesting stories that are easy to grasp, and you can take away with you. There are short mentionings of Arsenal and Tottenham playing each other to raise money for the Titanic Disaster Fund; that Arsenal played at White Hart Lane during WWII; that Herbert Chapman fostered team spirit through golfing; but these stories are rare and not unfolded. Even the story from the early days, under the Boer war, when the munition workers had to work overtime on Saturday, and therefore couldn’t attend matches and forced the club to become a limited company, is not told.