When I met the curator of Liverpool F.C. museum, Stephen Done, back in February, he told me that he hoped soon to be able to go over the exhibtions, which still looked very much the same as they did in 1998, when the museum opened. The reason why Liverpool decided to built a museum inside the Kop at Anfield in the first place was that the increasing number of Irish and Scandinavian fans travelling to matches had requested something to fill out their weeked in Liverpool.

So the main target group of the Liverpool museum was originally the die-hard supporters from out of town, who spend a lot of money travelling to matches – and to whom an additional £10 does not make that big a difference to the overall expenses of going. And I think this shows. In a positive way. Compared to, say, the Arsenal or the Chelsea museum, both of which seem to try to persuade innocent London tourists to become supporters with their boastful focus on uniqueness and unparallelled success (which, in fact, could be questioned), it is assumed that you are a die-hard Liverpool supporter, when you enter the Liverpool museum.

On the one hand, there seems to be a lot of knowledge taken for granted, on the other hand, the exceptionally long texts in the musem take it for granted, that visitors have come to share a common history. And therefore are genuinely interested in it. To give you an example, here is a description of Liverpool’s first match:

“The first game played at Anfield Road was against Rotherham Town on Thursday 1st September 1892 and kick off was at 5.30 p.m. The first programme cost 1 penny, and consisted of only two pages, the majority of which were taken up by explaining the off-side rule. The programme also took the opportunity to redress the anti-Houlding propaganda coming from Goodison Park and a short pen picture was provided: “To know him is to like him, because they never tried to know him. He is a man of energy, determination, and honesty of purpose, and under his presidency the Liverpool Club is sure to prosper, the same way the Everton club did. May he long be spared to take part in the many good works in which he is engaged in his native city.” So, the goals fitted with Broadie’s Patent Goal Nets (£3.15s.6d a complete set from the Net Department, Everton Terrace, Liverpool), the fans stocked up with Henry Hallards hand made cigarettes from his shops on Breckfield and Oakfield Roads, and a few “Sparkling” pints of Houlding’s Ale from the Sandon Hotel, Liverpool Football Club kicked off and started their great ascent to becoming one of the biggest football clubs in the world” 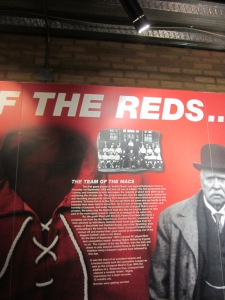 Some will say it is old fashioned. Others that it is a blatant case of “putting-a-booklet-on-the-walls”. And very few museums manage to get away with it – without heavy critique. When I do courses with museum professionals on exhbition concepts, one of the basic rules is “be aware of the medium”. An exhition is not a book or booklet cut to pieces and hung on the walls. The text should not carry the exhibtion, but support it.

But somehow, I think it is great here. And I am not even a Liverpool supporter! I think that the Liverpool museum shows, that it takes the passion and the interest of the target audience seriously. As a Liverpool supporter, you would want to learn new stories about the club, when you visit. You know that they are great – so the museum should not waste time and space telling that to visitors. It may be all right to “innocent” tourists, who have not yet found their footballing allegiance. But I doubt that these people go to Liverpool as tourists in the first place, and if they do, then that they go to Anfield in the second. Because the Anfield neighbourhood is not a pleasant area – it feels a bit like a warzone with hundreds of condemned houses standing empty.

Basically, the exhibition is a chronological story of Liverpool F.C. With a bit on the birth of the club, a bit on the early success – but it is the Shankly era from 1959 to 1974 that takes up most of it. That is followed by the glory years till 1989 – and then it rather fades, with 1989-91 labelled “The end of an era”, and the following years up to the opening of the museum labelled “Paradise lost”. Ok, there is a cinema for the amazing 2005 European Cup Win as an inescapable add-on. 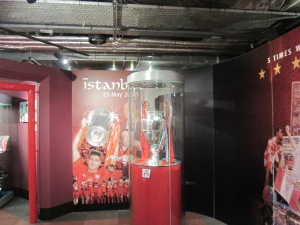 Predictably, it is the golden years and moments that dominate the storyline. And, for instance, the Heysel disaster is not pencilled out. But it is there. Along with the “Paradise lost” feeling for the post 1989 period. It seems natural here (whereas the National Museum of Liverpool erases Heysel 85 of the story, making the great emphasis on Hillsborough 89 a bit hollow). It sort of disrupts the storyline, making the overall impression a bit chaotic. Certainly I lost the plot a bit in the last part of the exhibition. 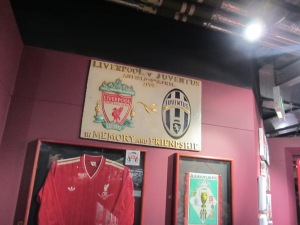 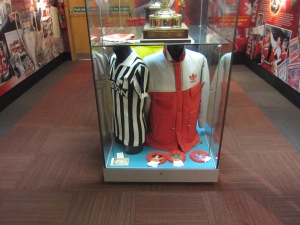 The exhitibion does not integrate the (relative) recent downs of Liverpool in a positive way like the Wolverhampton museum does. It is a partisan view. But it is not just a list of “unique selling points” as you find at Arsenal and Chelsea.

Admittedly, the layout is a bit dated, and the museum in general a bit worn down. And as I said, this is not something you should try at home! But I like the storytelling of the long texts. Just like the Chelsea museum, the Liverpool museum also puts great emphasis on their ground, Anfield. A room is dedicated to a huge model, where you can see the sloping hill of the Kop under the terraces before the rebuilding. On the wall, there is a screening of a TV documentary with Mark Lawrenson in South Africa, visiting the Spion Kop – the battlefield from the Boer war that made several English football club rename their main, sloping terrace. On the walls – well, there is even more book-on-the-walls, which upset a couple of my visiting colleagues. But the fantastic photos and the sheer joy of the narrator describing it made it the highlight in the museum to me. Although as a visitor, I would like to get the dramatic deterioation of the neighbourhood adressed. 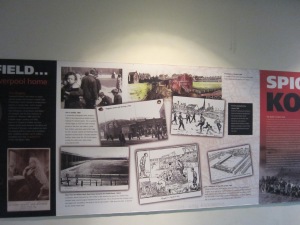 Another highlight is that they have had the foresight to collect and exhibit a crush barrier from the Kop. It often amazes me, how little has been done to preserve the heritage in connection with the rebuilding of the English football grounds. Well, the crush barrier here really is a gem, bringing back memories to older fans – and giving young fans an impression of what terraces were like. 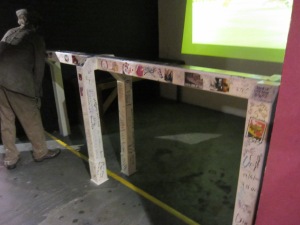 Another aspect I really like about it, is the general integration of fans’ culture in the showcases. There is a predominance of shirts, caps, medals, programmes. But in most showcases, contemporary fan culture is also present. An old rattle, a hat, plastic pennants, satin scarves, rosettes etc. Fans and fan culture is not something separate. It is just as much part of the story as the players. And again – even if I am a Manchester United supporter, these objects awake such strong memories of the seventies, eighties etc. that I actually want to read the text. In a way the more clinic display of player-related-objects in other museums doesn’t.

It will be interesting to see, what happens if the museum as planned is redeveloped. Will it be influenced by the new trends set by the Arsenal and Chelsea museums – or will it manage to hold on to its qualities? Will it find new ways of telling the many stories? Or will it become a modern, flashy, superficial branding platform?

Of course, Liverpool F.C. is also a business, and you go by the souvenir shop as you leave the museum. But also in here they have done really well, using old programmes as wall papers in a tunnel.

Character: Passion, dedication – for the die-hards. Looking at a list of the top 100 players, Tommy Smith is described as “he essence of Scouse distilled and poured into a Liverpool shirt”. In technical museological terms it is not elegant, and it may not convince museum professionals that it is worth visiting. But it is to Liverpool fans. So, Tommy Smith it is.